Cardinals choose German as next pope 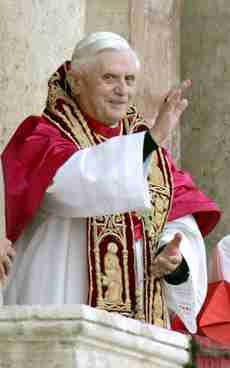 The German prelate, who turned 78 on April 16, will be the Roman Catholics’ 264th successor to St. Peter. He will be known as Pope Benedict XVI.

Although the announcement was greeted with delirious cheers by the multitudes gathered in St. Peter’s Square, the choice is certain to be a controversial one.

“Dear brothers and sisters, after the great pope John Paul II, the cardinals have elected me – a simple, humble worker in the vineyard of the Lord,” he told the faithful from the balcony of St. Peter’s Basilica.

“The fact that the Lord can work and act even with insufficient means consoles me, and above all I entrust myself to your prayers,” said Ratzinger, who appeared smiling and serene.

As head of the Congregation for the Doctrine of the Faith, Ratzinger served as Pope John Paul’s theological enforcer. Many who know him personally describe him as shy and reserved, but his strict enforcement of John Paul’s conservative views and his harsh silencing of several prominent theologians established his reputation as a somewhat divisive figure.

As successor to the immensely popular John Paul, whose 26-year papacy combined bold political strokes, an epic global pilgrimage and a death that provoked mourning worldwide, he faces a daunting task.

But the election of Ratzinger came surprisingly quickly.

When smoke began to curl from the Sistine Chapel’s chimney a few minutes before 6 p.m. Rome time, confusion reigned. Some in the crowd thought it was white; others were sure it was black. Italian television declared it white and so did the Vatican switchboard, but Vatican Radio said black.

The bells of St. Peter’s Basilica were supposed to clarify the matter. But at precisely 6 p.m., the bells began tolling the hour, adding to the confusion. Finally, when the bells started to toll at a few minutes after the hour, it was clear that a new pope had been elected.

An air horn sounded. Flags waved and songs in different languages were lifted toward the balcony where the new pope would appear.

After two inconclusive ballots that morning, and one the evening before, Ratzinger was elected in the conclave’s afternoon session on what would have been either the fourth or fifth ballot.

A total of 77 votes – the support of two-thirds of the 115 cardinal electors – were needed.

In the minutes after it became clear that there was a new pope, the faithful in St. Peter’s Square, and millions watching on television around the world, still did not know the identity of the new pope. All eyes turned to the balcony of St. Peter’s and the curtained door that would open to reveal the cardinals’ choice.

Cardinal Jorge Arturo Medina Estevez, the senior cardinal deacon, appeared first, and at 6:42 p.m. he told the world “habemus papam”-“We have a pope.”

He introduced Ratzinger as Benedict XVI.

The initial reaction of the crowd was mixed. Some seemed confused, but others began chanting, “Benedict! Benedict!”

Ratzinger, the first German pope since the 11th century, has not yet explained his choice of name, but the last Pope Benedict, who reigned from 1914 until 1922, worked to bring peace during World War I.

The election marks the conclusion of the most widely watched change in leadership in the history of the 1.1 billion-member Roman Catholic Church, a dramatic three-week period that began with the April 2 death of John Paul II.

To the surprise of even church leaders, millions of pilgrims streamed into Rome to pay their respects to the late pope, some waiting in line 10 or even 20 hours to spend a few minutes praying before his body.

A quarter of a million mourners pressed into St. Peter’s Square for John Paul II’s funeral, while an estimated 2 to 3 million more found other spots in and around Rome to watch on television, an experience they shared with hundreds of millions more around the world.

In the venerable tradition of papal conclaves, the week leading up to the voting was filled with speculation about campaigns and counter-campaigns, which cardinals were surging and which were fading.

But this conclave was unlike previous gatherings of cardinals in many ways. It was the largest, with 115 electors, and the most international, with 52 nations represented.

And while all but two of the men had been made cardinals by Pope John Paul II, sharing a certain understanding of the church and its teachings, they brought into the Sistine Chapel a wide array of concerns and points of view.

As the cardinals remained mum, attention turned to the priorities of the church in different parts of the world: issues of economic justice and a crippling priest shortage in Latin America; a drift away from Christian roots in Europe; the priest sex abuse scandal and technological tangles in North America; a vibrant faith mixing a clashing with other faiths in Africa and Asia.

Then on Monday, the cardinals made their last public appearance, a solemn procession in scarlet from the Vatican’s Apostolic Palace into the Sistine Chapel, all shown on live television for the first time.

Then, as the double oak doors swung shut, the focus shifted yet again. This time, all the digital, high-resolution, instantaneous technology of the world media turned to a simple stovepipe poking through the roof of the chapel.