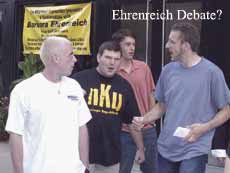 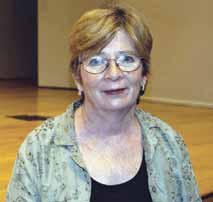 Author Barbara Ehrenreich visited Northern Kentucky University last Thursday already having a reputation for controversy and did nothing at her appearance to change that reputation.

Students and faculty members gathered at Greaves Hall September 18 to discuss similar, and opposing views, of the working world with the “Nickel and Dimed” author. With a living room setting on the stage, the presentation was organized so students could engage in conversation with the author.

Jerry Warner, vice president of academic affairs and provost, began the program by saying that the book has brought controversy, but it was chosen so students would “be exposed to new ideas.” Warner also said students should keep an open mind, because “not everyone sees the world as you do.”

Freshman Joy Regenbogen, an elementary education major, said, “After reading the book, my opinion towards Barbara was mixed. I liked some of her viewpoints but to tell the truth, I think she is very one-sided and closed-minded.”

Warner explained that the situations presented in “Nickel and Dimed” may not be relevant to most students, however it was important to read the book not only for class grades but also to recognize the contribution of low-wage workers.

Freshman Patrick Clark thought the Book Connection was a good idea, but said that “Nickel and Dimed” seemed to be targeted at an older audience. “I couldn’t really relate to it because I work for more than the minimum wage and I don’t have the same responsibilities as [Ehrenreich], like paying for housing,” he said.

Ehrenreich said in her presentation that she did not write the book with any particular audience in mind because it would “inhibit” her writing, but said it was “gratifying that the book has been read by so many people in the situations” described in her book.

Students posed Ehrenreich with critical questions about her views on racism, politics, the economy and various aspects of her experiences including the people she worked with, the companies she worked for and the jobs she held. For instance, one student asked if she felt guilty for taking away jobs from people who could have actually used them.

“No, I don’t at all,” Ehrenreich said. “This was during 1998 to 2000 that I was doing these different jobs, and unemployment was very low. … Every place where I applied really wanted and needed new workers.”

John Alberti, co-chair of the Book Connection, asked, “How do you believe we should solve the problem of low-wages and poverty?”

Ehrenreich replied, “Raise the minimum wage in this country at least to $7 an hour, which is where it would be if they had kept up with inflation, and two, universal health insurance.”

She also said the salaries of people at the top of companies should be lowered before the retail prices are raised, and industries should curtail advertising because it is a “colossal waste.”

Ehrenreich even addressed her idea of socialism and gave a response to the handouts from the College Republicans.

“I would change that flier to read ‘Capitalism can work.’ It is not working very well,” she said. She later added, “This book does not end by saying, ‘rise up, workers of the world, and overthrow capitalism,’ it says there are things we could do, right now, within capitalism, that would make us a much more humane environment.”

Ehrenreich received mixed reactions when she said she supported the legalization of marijuana and thought 18-year-olds should be allowed to drink alcohol.

“If you want to legalize pot and lower the drinking age, you can come to half of Northern Kentucky University’s funerals,” Regenbogen said.

“That may sound blunt but if you think about it, the more accessible it is for teens to get a hold of, the more kids will experiment with these drugs.”

As an atheist, students also brought up several concerns about Ehrenreich’s views of religion.

Ehrenreich’s responses included justifications for quoting the Old Testament in some of her work and ensuring students she was not making fun of Christianity. She did say she felt the President “is giving Christianity a bad name.” Several students left the presentation early after Ehrenreich expressed her religious views.

Despite conflicting ideas, Ehrenreich said she was “terrifically honored that Northern Kentucky University chose [her] book,” and left students with a message that any college student can relate to.

She said college students are “in a period of transition,” and it is ok if students do not know what they want to do after college right now.

However, she said no matter how successful people may become, “never forget where you came from; never forget your people.”