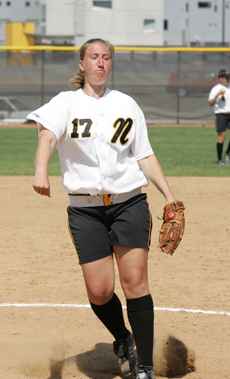 Krystal Lewallen pitched nine innings giving up an unearned run and Emily Breitholle pitched a two hit shutout as the Norse extended their winning streak to 30 games with a doubleheader sweep of Lewis in GLVC league play.

The Norse (30-0, 6-0 GLVC) used two different styles of play to sweep Lewis (16-13, 4-2 GLVC). In game one, NKU needed nine innings to put away Lewis 2-1. Both teams took a few innings to get things rolling. The Norse were the first to dent the scoreboard in the fifth inning. The inning started with a single by Heather Cotner and a sacrifice bunt by Becky Napier advanced Cotner to second. An RBI double by Sara Becker made it 1-0 NKU. This run would not be enough, however. In Lewis’ half of the sixth inning, Lewallen gave up back to back hits to Christina Willis and Robin Martz.

A sacrifice bunt by Beth Shelus advanced the runners to second and third with only one out. It appeared that Lewallen would get out of trouble with a strike out and a pop out, but the ball was dropped by the shortstop allowing the tying run to score. Extra innings were necessary in this game, but the Norse came out victorious in the bottom of the ninth inning. A leadoff single by Napier started the inning.

Errors were the cause for the Norse taking Lewis into extra frames. NKU had two errors in the game, uncharacteristic of the Norse. Lewallen recorded the win pushing her record on the season to 16-0. Shannon Roney was charged with the loss setting her back to 4-5.

In game two of the doubleheader, the Norse were seeking their 30th consecutive victory and they got it in a big way. NKU needed just five innings to defeat Lewis 10-0. NKU became just the 13th softball team in NCAA history to win 30 consecutive games. A combination of outstanding hitting and fantastic pitching was the formula to this game. Although NKU scored ten runs, it took them two innings to get warmed up. But once they got started, they jumped all over Lewis starter Kasey DeLair. NKU started in the third inning with a walk to Owens. Rachele Vogelpohl singled advancing Owens to third.

Rothbauer singled scoring Owens. Stephanie Leimbach singled on a bunt loading the bases for Lindeman who singled clearing the bases. One of the runs was scored on an error by Lewis. At this point in the third, Lewis pulled their starter and brought in Ashley LeGrand to take it the rest of the way. LeGrand was able to get out of the inning, but she was in for a rough outing as well.

In the next inning, NKU was at it again. The Norse started out with a single by Becker and a walk to Owens. Vogelpohl singled on a bunt attempt loading the bases for the second consecutive inning. Rothbauer tripled clearing the bases and Leimbach brought her in with a single. One out later, Leimbach stole second base and was brought in with a double off the bat of Sarah King. King was brought in with a double by Cotner. Batting around in the 4th inning and six hits later, the score was 10-0 NKU.

Although the offensive numbers were off the charts in this game, Rothbauer had five RBI’s in the doubleheader. Breitholle received plenty of help from her offense improving her record to 10-0. DeLair was chased out of the game after just two innings pitched and her record falls to 3-2. The Norse are definitely sending a message to opponents to get off the tracks when the train is coming through.