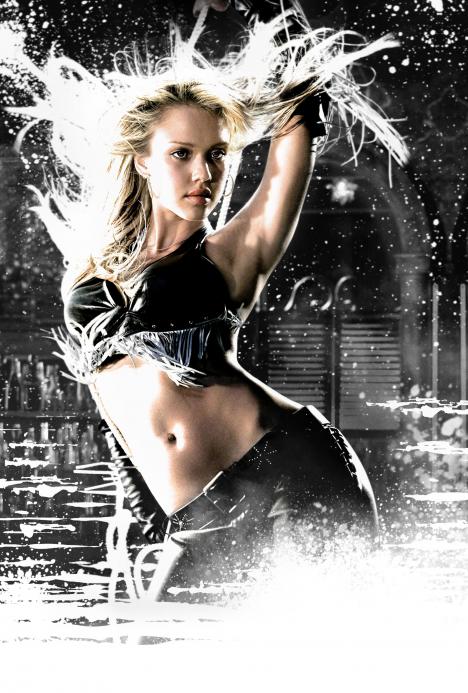 Based on the “Sin City” graphic novels, author Frank Miller and critically- acclaimed director Robert Rodriguez birthed a visually stimulating film. Surprisingly enough, “Sin City,” unlike other comic book movies, isn’t loosely based on these graphic novels. The director’s idea to make the film accurate was to use the graphic novels as a storyboard. The film follows the stories of three main characters Hartigan (Bruce Willis), a cop who needs to retire; Marv (Mickey Rouke), a street-fighting recluse; and Dwight (Clive Owen), the lover. While many films have only one hero and one villain, these characters can’t be labeled as either. The characters live in Basin City, where enough corruption and violence occurs to make New York City look harmless. Marv loses the love of his life, Goldie (Jamie King), and stops at nothing to find her killer. Anyone who stands in his way suffers the consequences. Marv’s story is rather long and tragic, but it introduces most of the other characters. Dwight decides to defend Old Town, a place run by mercenary hookers, from Jackie Boy (Benicio Del Toro). Dwight’s plan backfires and causes an even bigger conflict with the mafia. Hartigan’s story slowly ties in with Marv and Dwight’s as he fights to keep an 11-year-old girl safe from a sexual predator. Think of “Sin City” as three long vignettes, overlapping each other by time, with the same characters. The dialogue, music and characters are similar to noir films made in the 1940s. Unfortunately, these elements bring a comical sense to the film, which undermines the seriousness of it. Although “Sin City” is filmed in black and white, colors are used to emphasize certain objects. Actors and actresses break their typecast labels and even though their characters are only human, they still live in comic book world. This gives them the ability to jump from three stories, bleed white blood and take multiple bullet wounds. Comic book readers who follow “Sin City” will see that this adaptation stays true to the graphic novels.