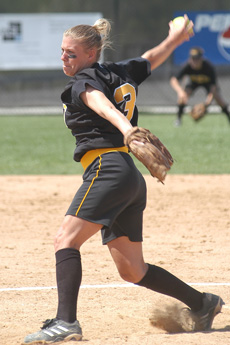 In this week’s Hot Seat, John interviews Sarah Newland. She is a junior pitcher on this year’s softball team.

JR: What’s the hardest pitch for a softball pitcher to throw? SN: A changeup. For me it was hard trying to slow the ball down. When you slow it down, you can possibly hang it, and that can be potentially bad.

JR: Do you ever want to bat in a game? SN: Yeah, absolutely. It’s not fair that I can’t hit anymore.

JR: Who would you say is the best hitting pitcher on the softball team? SN: I want to say me, but that wouldn’t be fair. All of us are great hitters, and Coach Stewart needs to realize that! I’d be leadoff, Krystal (Lewallen) would bat second, and Bob (Emily Breitholle) would bat third. I can see it now.

JR: As a pitcher, do you ever brush anyone back from the plate? SN: Oh, yeah! It’s definitely fun to do! The first pitch of the game is always good to throw inside. If it hits them, I guess they didn’t move quick enough.

JR: Have you ever had a hit come quickly back up the middle? SN: Yeah, actually when I was younger I was hit hard in the chest one time and they had to get a rag with ammonia on it to wake me up. My freshman year at NKU in Florida, I took one off of the shin and basically had a golf ball sized bruise for a week.

JR: Is there any pressure having 26 wins and no losses? SN: It would be if we were that worried about it, but really we’re just going out and playing.

JR: Do you get recognized a lot around campus as softball players? SN: I’m sure it’s probably pretty hard not to, since all of us wear our sweats to class.