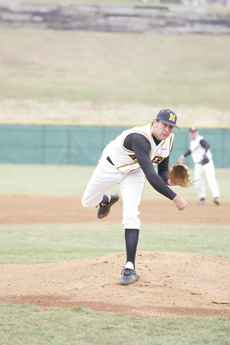 The Northern Kentucky University baseball team was swept in a doubleheader against Saint Joseph’s during their home opener March 26.

The first game started off on a positive note for the Norse. Leadoff hitter Kory Lonergan singled to centerfield in the first inning and ended up scoring the game’s first run when Jon Back grounded out to the third baseman.

NKU pitcher Derrik Moeves rolled along, not allowing a hit during the first three innings. Moeves seemed ready to keep up his domination, striking out the first batter he faced in the first inning before walking St. Joe’s Luke Barrett.

St. Joseph’s followed with a single by Mike Victor. Moeves got the next batter out on a fly ball to left field before a Sean McBride single loaded the bases for Scott Smolek. Smolek proceeded to smack a single to right field to put St. Joe’s up 2-1. The Norse got out of the inning without allowing another run.

NKU had its chances to come back and win the game. In the bottom of the fifth inning, Joe Kendall drew a leadoff walk and was replaced by pinch runner Jason Nintrup. Nintrup advanced to third base following a bunt and wild pitch, and represented the tying run at third base with one out. The Norse could not capitalize with Lonergan striking out and Back flying out to left field.

The seventh inning provided another chance for the Norse to tie or win the game. Alex Frank and Matt Wagers each reached base to start the inning. Greg Pass was called upon to pinch hit for Jim Volpe and was hit by a pitch to load the bases with one out.

Lonergan stepped up to the plate with a chance to get the Norse back in to the game. Lonergan hit a fly ball to left field, but St. Joe’s outfielder was positioned perfectly in shallow left field and was able to double Wagers off at second base to end the game.

Norse coach Todd Asalon said one of the keys to success this season would be getting clutch hits, and so far this season it hasn’t happened for the team.

“The same thing has happened all year,” Asalon said. “We’ve got to hit with runners in scoring position. We call them ‘money at bats,’ and we talk about it and work at it, hopefully it’ll happen.”

Frank was the leading hitter for the Norse in the first game, going 2-3.

Moeves’ record went to 1-2 after the loss; he struck out five and walked three, only giving up five hits for the complete game.

The team couldn’t seem to get the offense on track in the second game, collecting only four hits and losing 6-0.

NKU was trailing only 1-0 going in to the seventh inning before St. Joe’s scored three runs, blowing the game open.

Back led the Norse in hitting the second game, collecting two hits.

With the two losses, the Norse dropped to 4-5 on the season and 2-4 in the GLVC. St. Joe’s stays undefeated in the GLVC with a 6-0 record.

“(St. Joe’s) is nice ball club,” Asalon said. “If we win that first game against them, we’d have had a better attitude in the second game.”

“Our conference is so balanced,” Asalon said. “It comes down to who does what in the games. Our pitching is good and we play as good of defense as anyone in the conference.”

The Norse have four big games with UW-Parkside coming up this weekend. Parkside currently has the second-best GLVC record, and is expected to be one of the top teams in the conference this season.

“They lost a lot to graduation,” Asalon said. “They’ll be a good team. We need to win some home games now.