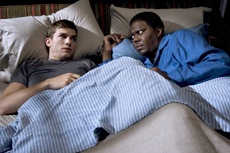 “Guess Who,” starring Ashton Kutcher and Bernie Mac, is a romantic comedy with ridiculous wisecracks and scenes.

“Guess Who” derives from the 1967 “Guess Who’s Coming to Dinner?” which starred Katherine Hepburn and Sidney Poitier.

Much like “Meet the Parents,” a young man wants to marry his girlfriend but has to deal with her father first.

To raise the stakes higher than “Meet the Parents,” the couple (Kutcher and Zo