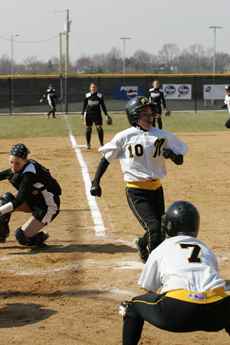 Emily Breitholle pitched a complete game two-hit shutout, and Rachele Vogelpohl had a triple that drove in two runs in the second inning as the Norse completed the two-game sweep of Bellarmine at the Frank Ignatius Grein softball field March 21.

The wins extended Northern Kentucky University’s winning streak to 24 games as the number one team in the country kept on rolling. NKU started early in this game scoring three runs in the second inning on a two-run triple by Vogelpohl and an RBI single by Ricki Rothbauer. The Norse didn’t look back from there.

NKU added an insurance run in the fifth inning when Angie Lindeman hit a one-out triple and Sarah King hit a sacrifice fly to drive in the final run for NKU, making the score 4-0. All four runs were given up by Bellarmine pitcher Ashley Eppich who falls to 1-6 this season. The game was never in question for NKU and played at a quick pace of an hour and a half.

Outstanding pitching has carried NKU throughout the season thus far. Breitholle was stingy giving up only two hits to Bellarmine. At one point in the game, Breitholle retired 13 batters in a row, including striking out the side in the second inning. The win is Breitholle’s eighth of the season.

During the doubleheader, NKU pitching baffled Bellarmine batters, giving up just three hits. The tough pitching froze the bats right out of the hands of Bellarmine. The best opportunity Bellarmine had to score was in the sixth inning with a leadoff double, but NKU battled out of trouble and retired Bellarmine in order in the seventh inning securing the shut-out victory.

In game one of the doubleheader, NKU also won 4-0 with Krystal Lewallen pitching a one-hit shutout and striking out 17 Bellarmine batters. The win enabled Lewallen to move to 12-0 on the season. The loss went to Claire Horstman, dropping her to 7-6. Horstman gave up four runs on eight hits in a little over four innings of work. The losses drop Bellarmine to 9-13 overall, snapping their modest two-game winning streak.

NKU was proficient with their base runners collecting six hits and scoring four runs. The Norse left six runners on base, but most of those were with two outs and no one in scoring position. The combination of timely hitting and terrific pitching has been the recipe for NKU thus far, carrying them to the number one ranking in Division II.

The softball team is all business right now. The one thing on their minds is winning the next game. It shows on the field, where they have the perfect mix of winning games and having fun.

NKU will put its school record 24 game winning streak on the line when they travel to Battle Creek, Mich., to participate in the GLVC/GLIAC showdown against Ferris State. NKU defeated Ferris State earlier in the season in Orlando 2-1.

NKU returns home to play Indianapolis April 2 for a doubleheader with game one at noon and game two scheduled for 2 p.m.