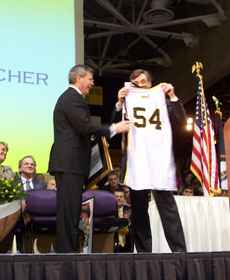 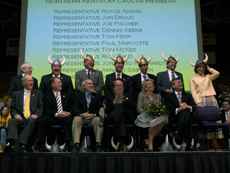 Northern Kentucky University welcomed Gov. Ernie Fletcher back to the university March 15 to celebrate the passage of the 2005 state budget.

As thanks for the portion of the $20 billion budget that goes toward NKU, Fletcher and Kentucky lawmakers were honored at a rally in Regents Hall.

“This is a celebration of the 2005 Kentucky General Assembly and the product of their work with the governor,” said NKU President James Votruba.

“As you all know, northern Kentucky has much to be thankful for. Today is a time to say thank you.”

More than $100 million of the budget will fund NKU projects, including $54 million for The Bank of Kentucky Center, $34 million available to borrow for the construction of a new student union, $6.5 million for other NKU operations and $15.4 million for Gateway Community ‘ Technical College.

“(You were) building it too small because it’s not very frequently that you can get the legislature to support a project like this – because there’s a lot of competition across the state as you know for projects – and I said ‘If you’re going to do it… you need to make sure that it accommodates the future adequately.'”

Votruba recognized the House and Senate leaders for their time and consideration in passing the budget and acknowledged the community for its support, saying the collaborative efforts will only make the region more prosperous.

“What should be clear to us all is that if we work to construct a collective mission for our future and then stand together to get it accomplished, as strong as this region is today, we can be sure that our best days are still ahead of us,” said Votruba.