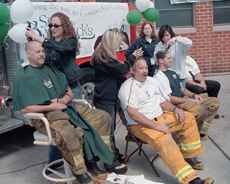 Writer Will Rogers once said the only thing that can prevent hair loss is the floor, but for those who are ready to sacrifice their vanity to support a good cause, the upcoming St. Baldrick’s Day celebration could be the place to be.

Volunteers who participate in the St. Baldrick’s Day celebration exist to recruit those willing to shave their heads in public in return for donations to fight children’s cancer.

The event will take place March 20 on the second floor of Jack Quinn’s Irish Pub in Covington, where the stage will buzz as participant’s heads are shaved in front of a crowd of cheering friends and supporters.

Local organizer Stephanie White, a student at Salmon P. Chase College of Law, said that while it supports a serious cause “the event itself is a lot of fun.”

St. Baldrick’s Day began six years ago as the brainchild of three charitable Irish businessmen in New York City, and is now a national event held in more than 200 locations across the country.

In the area, anyone interested can become involved either by sponsoring or participating in the head shaving.

White encourages anyone interested in joining the fight against children’s cancer to collect donations from friends and family in the weeks leading up to the event. Those willing to shave their heads can solicit donations or sell $1 donation certificates.

All of the certificates purchased will be displayed on a giant poster the day of the event.

Worldwide, an estimated 8,500 participants are expected to shave their heads.

While the celebration has become more popular across the world, White emphasizes that some of the impact from this year’s event will be felt locally.

White said Children’s Hospital in Cincinnati is one of the research facilities funded by the program.

For White, who organized last year’s event, participating in St. Baldrick’s Day is a personal commitment. “I continue to organize it because of a little girl that I knew that passed away from leukemia about eight years ago,” she said.

While she couldn’t bring herself to shave her head completely, White cut more than 10 inches of her hair at last year’s celebration and said that anyone willing to part with seven or more inches of hair can raise money for the event through a sister program called “Locks of Love.”

The hair is either sold or made into wigs for children under 18 years old who lost their hair because of chemotherapy treatment or other medical conditions.

At this year’s event, raffle tickets and door prizes donated from local businesses will also be available, as well as food and desserts from local restaurants.

“We just want to let people know that they’re invited to come and either participate or just watch and buy raffle tickets and have a pint,” White said.