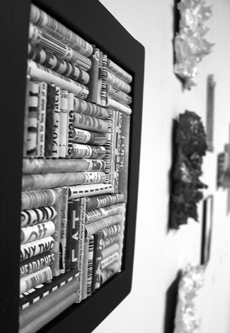 A student has taken over the Fine Arts Gallery. Rather than a term paper, Casey Bussard, art history student, chose a unique senior project: to curate an exhibition.

This may sound like an easy task, but receiving over 500 images of artwork to sort through is sure to change anyone’s mind.

Bussard, along with David Knight, the gallery’s curator, posted advertisements in magazines “Art in America” and “City Beat,” each stating the requirements of the art: the size could be no larger than 6 inches by 6 inches, and the theme of the work was left to the artist.

“A theme based on size had never been tried before,” Bussard said. Only one other student at NKU has attempted to curate a show as Bussard has done in the last 10 years.

Bussard was pleased with the overwhelming response, although it meant a lot of work. She said she was “looking for craft” when selecting the pieces.

“I did not want a lot of photographs because the medium lends itself to a small format,” she said.

Due to the closing of the small gallery, the large gallery was divided in two sections and a new exhibition was booked to run in one half while Bussard’s show is in the other. She has invested a lot of time in the show; she has been working on the exhibit since last May.

The artists featured in the exhibit also have a lot of time invested for this show. Oliver Meinerding, an art student at NKU, had three pieces selected to be part of the show: “Total Awesome Take-Off Rocket Explosion,” “To Play or Dance to Rock and Roll” and “Emir.” These three pieces, full of color and life, look like they belong in a series of a cartoon in the works.

His work is on six-by-six cardboard pieces, with the cartoon figures in each one performing a different action.

“(I) made the pieces to have fun and to break away from my usual work,” he said. His major influences are music and movies such as “Big Fish.”

Alex Jarman, a studio mate to Meinerding, also has artwork in the show that utilizes cardboard, however, Jarman has added many 3-D elements. In his piece, “Voices Unheard,” stars hang from the made-up sky and graphite arrows loom all around a particular theme.

Viewing his work is like stepping into a Cincinnati alley covered with graphite.

Another artist, Jennifer Lewis, from Boston, presents the viewer with an image that looks torn from the pages of a kid’s book, as one patron said. “Pond” is a pink cat painted on a wood block that was admired opening night by many people.

Unlike the children’s book approach of Lewis, Pamela DeCoker from Oxford, Ohio, approaches her work with more conceptual ideals. Her artwork, “Untitled No. 2” lacks all color. The white image is composed of many layers of acrylic paint applied to a computer remnant and then a “casting of paint” is removed, she said.

“Most (people) think of containers holding paint not paint as a container,” DeCoker said of her work with paint.

Although she does not usually work on such a small scale, she made an exception for this show. She is now working on pieces that are much larger and full of color, she said.

Several pieces in this exhibition are smaller than the six-by-six requirement, such as Bussard’s favorite by Damon Belanger from California, titled “Little Pink Mouse.” This art is just as the title implies. It is a little painted pink mouse on a block of wood 1.25 inches by 2 inches. This piece is a good example of what Bussard was aesthetically looking for because it makes her smile, she said.

Another tiny art piece titled, “This is Massive,” measured 1 inch by 1 inch and was submitted by Richard Fruth, an art professor at NKU. The art is a piece of bronze with the word “massive” embossed in it.

All of these works and more are on display in the Fine Arts Gallery until March 4. Many of the pieces are for sale by the artists and prices can be found in a binder located by the entrance.