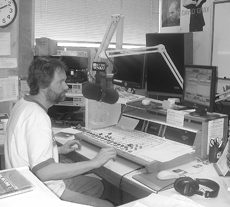 Flip on your FM radio dial, scan the airwaves and listen. Those tired, old songs and frenetic commercials are both part of a tightly-controlled format that adheres to a fundamental fiscal policy: stick to the musical mainstream and air countless commercials.

Now, tune your dial down to 89.7 FM. You might hear Modest Mouse followed by Johnny Cash or classic Bob Dylan. Maybe you’ll catch some progressive news from National Public Radio.

Listen even closer, and you may be shocked at what you’re not hearing: commercials.

WNKU signed on the air April 29, 1985. “Signing the paperwork to put WNKU on the air was one of the first things Dr. Leon Boothe did when he first became President of NKU,” said station news director Maryanne Zeleznik. “It took several years to make that dream a reality.”

Today, WNKU enjoys a reciprocal relationship with the school, said Grady Kirkpatrick, assistant general manager for WNKU programming and operations. The station is licensed to NKU’s Board of Regents, while the university provides broadcasting and office space in Landrum in addition to salaries for the full-time staff.

“We’re always happy to promote university programs and events that will be of interest to our audience,” Kirkpatrick said. “However, WNKU is an editorially independent, journalistic enterprise.”

More stars than are in the heavens

In the early 1990s, WNKU changed from a news and folk music station to a news and adult, album, alternative rock-based format. According to Kirkpatrick, each producer/deejay is given nearly free reign within his or her segment.

For listeners, this artistic license results in an eclectic mix of blues, R’B, folk, singer-songwriters, bluegrass, reggae, Celtic and Latino music, in addition to the top local musicians.

Beemon said that WNKU listeners benefit from the station programmers’ deep love and knowledge of music.

“Even though (my show) is a Saturday night ‘boo-tay, par-tay’ show and not a music history class, there really is a difference in what a Little Richard song sounds like, depending on what label he was on at the time,” he said. “And since I think it’s cool that his guitar player on a particular track was a pre-famous Jimi Hendrix. I’ll share that info with our listeners in the hope that they’ll also find it interesting. Otherwise, I just tell myself to get out of the way and play more music.”

Aaron Sharpe, acting director of development and marketing, said WNKU resists the boring, stuffy stereotypes that plague much of public radio. By doing so, he said, listeners are rewarded by getting to hear exciting new bands before they hit it big.

“(Listeners) have found in WNKU a station that isn’t afraid to try new things,” Sharpe said. “Over the years, WNKU has been first in the market to play Dave Matthews Band, Norah Jones, Los Lonely Boys, Modest Mouse, Joss Stone, Rilo Kiley and Bright Eyes, to name a few.”

All the news that’s fit to transmit

In addition to its unique music format, WNKU is one of the local providers of NPR news and carries the popular NPR news magazine segments ‘Morning Addition’ and ‘All Things Considered.’ The station is also highly regarded for its award-winning local news coverage.

According to Zeleznik, the station’s goal is to give its listeners respect by providing relevant information.

“We may not cover every traffic accident, but we do cover stories that will have an affect on people’s lives,” she said. “For example, (WNKU news reporter) Jay Hanselman is often the only broadcast reporter covering meetings at Cincinnati City Hall. Decisions made there affect people not only in Cincinnati, but the entire region.”

With its on-campus location, WNKU has also been a source for on-the-job training to dozens of interns and student workers throughout the years. In fact, as Zeleznik points out, reporter Hanselman began at the station as a student before being hired full-time in the mid-’90s.

Kirkpatrick advises prospective radio professionals to submerge themselves in radio culture. “Research as much as possible about the history and current status of radio and the evolution of ‘new media,'” he said.

“There have been a lot of changes over the years that have resulted in a lot fewer people working in radio. However, there is a need for new talent in the industry. If you decide to pursue your interest, follow up with course study and as much hands on experience as possible.

There are a lot of folks with great voices. It’s how you use your voice and unique talent to engage, inform and entertain listeners.”

“I encourage anyone considering a radio career other than public radio to run away quickly and find something else to do,” jokes Michael Grayson, music director and on-air host from 9 a.m. to noon.

“Corporate commercial radio is on the verge of becoming 25 voices over the entire country with computers reproducing the same format in every city,” he said, quickly contending that he “may be a little extreme” in his thinking.

According to Kirkpatrick, WNKU’s target audience age is the 25 to 54 crowd (reaching a 60 percent male and 40 percent female population). However, he and others at the station profess that they all feel blessed to be generating quality radio for a diverse and appreciative audience.

Since public radio stations do not sell advertising, they must rely on listeners’ financial support in order to survive. According to general manager Benjamin Singleton, listener and member contributions pay more than half of the station’s operating expenses. These tax-deductible support dollars help pay for programming and operating expenses while helping the station gauge listener interest in particular programs.

In this way, WNKU has survived for nearly 20 years, a fact that has not gone unappreciated, Grayson said.

“(We have) extremely well-informed listeners. It’s nice to work to such a sophisticated audience,” he said. “This is radio heaven.”