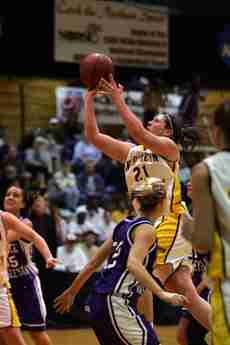 Myers wasn’t the only person scoring over 20 points as forward Karyn Creager scored 24 points on 8-11 shooting. Creager also went 4-5 from three-point range allowing the Norse to play the inside/outside game to perfection against the Panthers. Creager also extended her consecutive free throw streak to 21 by going 4-4 from the stripe. This was a game between an up-tempo Panther team and a defensively sound Norse team that ranks number two in scoring defense in the GLVC.

Kentucky Wesleyan wanted to push the ball up the floor, but the Norse did an outstanding job defending the fast break allowing zero points in that category. Defense was the key as the Lady Norse held the Panthers to 34 percent from the field. This season NKU is holding opponents to an average of 40 percent from the field.

NKU controlled the game from inside the paint beating the Panthers 44-24. NKU also attacked a vulnerable corner defense by hitting several shots from both corners. When it wasn’t Creager or Myers hitting shots, guard Sarah Woods chipped in 13 points on 5-9 shooting.

NKU used a four-minute scoring drought by the Panthers to get some distance between them. At the 6:08 mark in the first half, NKU hit back-to-back three pointers and added another field goal to open the game up at 27-15. They rode this momentum into the half leading 36-22 and never looked back.

NKU held the Panthers to just 27 percent from the field in the first half. Kentucky Wesleyan made a few scoring runs in the second half, but each one was answered by NKU. The closest the Panthers came to the Lady Norse was 10 points. Easy baskets inside by Myers and the outstanding perimeter shooting by Creager allowed NKU to open a 20 point lead in the second half en route to the 18 point victory avenging an earlier loss in Owensboro 63-48.

Kentucky Wesleyan countered with three players in double figures. Mary Czarnecki led the Panthers with 16 points and six rebounds. The Panthers had no answer for the inside game the Norse brought. The Panthers were denied a chance to even their record at 11-11 and sweep the season series against NKU.

At 10-5 in the GLVC, NKU is two games back of first place Quincy in the loss column. The Lady Norse still have a game against Quincy at home and a road game with second place Wisconsin Parkside, so the door is still open for NKU to win the GLVC conference. Winning the conference would give NKU a number one seed in the conference tournament that sends the winner of the tournament to the Division II NCAA tournament.