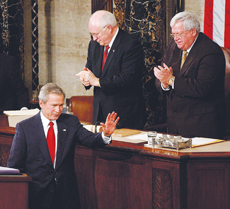 WASHINGTON – President Bush urged Congress Feb. 2 to overhaul Social Security as the centerpiece of his ambitious second-term agenda, arguing that younger Americans can no longer count on the venerated New Deal program because it’s headed for what he called “bankruptcy.”

Bush made his bold proposal in a State of the Union address to a joint session of Congress and to Americans watching at home on live television, splitting his themes almost evenly between foreign affairs and domestic concerns.

Bush lauded the recent elections in Iraq, Palestinian territories and Afghanistan as proof that freedom and democracy are on the march worldwide and that his aggressive and sometimes controversial foreign policy is paying off. He said U.S. forces would remain in Iraq indefinitely and called for $350 million in assistance to the Palestinians.

He also issued new warnings to Syria and Iran.

Looking on from the gallery overlooking the House of Representatives, Laura Bush watched with two foreign nationals, who were meant to underscore recent U.S. successes abroad: One recently voted in Iraq and the other in Afghanistan.

In one of the evening’s more emotional moments, Bush introduced the parents of a Marine killed in Iraq, Sgt. Byron Norwood of Pflugerville, Texas, and read from a letter he’d received from Norwood’s mother, Janet:

“When Byron was home the last time, I said that I wanted to protect him like I had since he was born. He just hugged me and said: `You’ve done your job, mom. Now it’s my turn to protect you.”

As Janet Norwood, gripped her husband Bill’s arm, her eyes misting over, the audience gave her a sustained ovation. Seconds later, Safia Taleb al-Suhail, the Iraqi woman who’d cast her vote last Sunday and whose father had been killed by Saddam Hussein, hugged Janet Norwood.

Bush brought an aura of political success to his address that few American presidents have shared, for he not only just won a second term in office, but he also helped his party expand its control of both houses of Congress.

Lyndon Johnson in 1965 was the last president to enjoy a position of power comparable to Bush’s now. LBJ’s landslide 1964 win and his even larger Democratic majorities in Congress arguably gave him even more power, which he used to push through his Great Society domestic program and to escalate the war in Vietnam.

In his address, Bush reminded listeners that he, too, has a bold agenda at home and abroad, albeit with hopes for far different results. He cast it all in terms of his – and his country’s – obligations to history.

“Over the next several months, on issue after issue, let us do what Americans have always done and build a better world for our children and grandchildren,” he said.

For the nation’s domestic needs, Bush proposed dramatic changes in Social Security that he said are needed to fix a program headed for serious financial trouble.

“Social Security,” Bush said, “is headed toward bankruptcy. And so we must join together to strengthen and save Social Security.”

Bush pleaded for open minds, aware that Democrats are unified in opposing the central recommendation of his proposed changes – to divert wage taxes away from Social Security to pay for new personal investment accounts – and that many Republicans fear political fallout at the polls in 2006 elections.

“Fixing Social Security permanently will require an open, candid review of the options,” the president said. “I will work with members of Congress to find the most effective combination of reforms.”

He said options “on the table” include raising the retirement age, changing benefits or discouraging early retirees from drawing checks. He emphasized that he’s ruled out raising taxes.

Bush also spoke of the culturally conservative values that he and many of his supporters embrace, endorsing the “culture of life” that opposes abortion. He called for prohibiting the creation of human embryos for medical experiments and a constitutional amendment to ban gay marriage.

“Our second great responsibility to our children and grandchildren is to honor and to pass along the values that sustain a free society,” he said. “Government is not the source of these values, but government should never undermine them.”

The president also announced that his wife, first lady Laura Bush, would head a new national initiative against youth gangs.

Looking overseas, Bush spoke in more detail about his broad goal of spreading freedom, which dominated his recent inaugural address.

“Our third responsibility to future generations is to leave them an America that is safe from danger and protected by peace. We will pass along to our children all the freedoms we enjoy – and chief among them is freedom from fear,” he said.

He praised the Iraqi people for braving violence to vote last Sunday and linked American success throughout the Middle East to their success at establishing a democracy.

“We will succeed because the Iraqi people value their own liberty – as they showed the world last Sunday,” he said. “We are standing for the freedom of our Iraqi friends, and freedom in Iraq will make America safer for generations to come.”

There was symbolism on the House floor as well. A number of members of Congress showed their solidarity with Iraqi voters by holding up fingers stained by purple ink – a symbolic salute to the joyous Iraqis who celebrated voting Sunday by waving the purple fingers that showed they’d voted.

“The new political situation in Iraq opens a new phase of our work in that country,” he said. “We will increasingly focus our efforts on helping prepare more capable Iraqi security forces – forces with skilled officers and an effective command structure.”

He said the goal of a democratic Palestine living peacefully side by side with Israel “is within reach” and promised continued U.S. help to reach that goal.

He warned other nations anew against harboring terrorists, putting Syria on notice that he expects it to stop and singling out Iran for special attention.

“Today, Iran remains the world’s primary state sponsor of terror, pursuing nuclear weapons while depriving its people of the freedom they seek and deserve,” he said. “We are working with European allies to make clear to the Iranian regime that it must give up its uranium enrichment program and any plutonium reprocessing, and end its support for terror.”

He also urged the leaders of Egypt and Saudi Arabia to allow their people more democracy.

In another remark meant to assuage fears that he acts unilaterally and alienates traditional allies, Bush said: “In the next four years, my administration will continue to build the coalitions that will defeat the dangers of our time.” He’s made overtures to European allies, notably by making Europe his
first overseas trip of his second term.