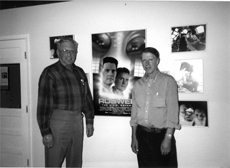 If you don’t believe in extraterrestrials, one professor might change your mind.

Robert Trundle, Ph.D., is a full-time philosophy professor. His book, “Is ET Here? No Politically, but Yes Scientifically and Theologically” comes out in May.

An expert in the areas of ethics, politics and theology, Trundle received his Ph.D. in philosophy from the University of Colorado at Boulder. He has written numerous books on the philosophy of science and the history of philosophy, as well as countless journal articles. He is also the first philosopher to have written both a professional article and a book in support of ET’s probable presence.

Martians and UFOs have captivated him since he was a child, and the interest runs in his family. His grandfather was also fascinated with aliens and even bequeathed him a small collection of books upon his death, Trundle said.

“Is ET Here?” contains material from UFOlogists and military experts in support of extraterrestrial existence on Earth, as well as many interesting UFO stories and sightings. Trundle also defends his own stance on the possibility of little green men visiting our planet.

“I believe contact was made 50 years ago,” Trundle said, “and I believe beings from other planets are here now, mainly to study us.

“There are benign scenarios in which they might be seen as anthropologists coming here out of curiosity. Then there is a more threatening scenario, which is that they’re studying to see if the earth is habitable. An even more worrisome possibility is that they have a hybrid program of sexually mating with humans to strengthen their species.”

Trundle also points out the dismissive attitude of many scientists. “I argue as a philosopher of science that science cannot exclude the possibility of ET’s visit,” he said. “This, coupled with thousands of well-regarded witness accounts, renders reasonable the belief. I’m talking about pilots who have come forward even though it’s meant they’ve had to undergo psychiatric exams as a direct result.

“Science says it’s impossible to travel at the speed of light. If it were possible, it would take four years of traveling at the speed of light to get to the nearest star system, Alpha Centauri,” Trundle said. “Given our current technology, it would probably take us 50,000 years to get there, plus or minus. Based on that, the scientific establishment somewhat blithely dismisses the existence of extraterrestrials. It’s like saying if we can’t do it, they can’t do it either.”