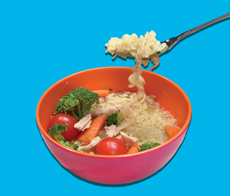 Although college is an opportunity to gain a higher education and understanding of the complex world, when it comes to food, students want simplicity.

Ramen noodles have been considered a staple food for college students.

The preparation for the microwave-ready ramen soup meal is simple.

“Boil them, strain the noodles, and add the flavor,” Arienne Olson, junior elementary education major, said. Ramen wasn’t always an instant meal. Momofuku Ando, the founder of Nissin Foods in Japan, perfected the instant noodle. In the 1970s, he marketed it to the United States, and according to the Book of Ramen by Ron Konzak, the world ramen market grosses about $10 million annually.

The low cost and high profit from these noodles can be attributed to the international locations of ramen factories. Although ramen is common in many countries, the flavoring and preparation may vary. Korean Ramen, for example, contains a lot of spices and has packets of black bean sauce included.

China, the birthplace of ramen, has the product in a variety of Szechwan flavors, whereas Japan, the country credited with flavoring, has their ramen mostly in mild seafood flavors. The United States offers ramen in a variety of meat, mushroom and mild spiced flavors according to the Book of Ramen.

Not all college students of today may remember the introduction of ramen in America, but they carry their love, or need, of ramen with them to college.

Monica Schoster said, “I’ve eaten ramen like four times in the past week.” The sophomore art education major said she tried ramen in high school and now eats it on a regular basis.

Although many college students use the cooked noodles and flavor packets as a meal, few realize the potential each pack possesses.

The Official Ramen Website (www.mattfischer.com/ramen) is dedicated to just that – new recipes for ramen noodles.

Whether used for a quick meal or a base ingredient to experiment with, ramen has found its niche within our society and college life.