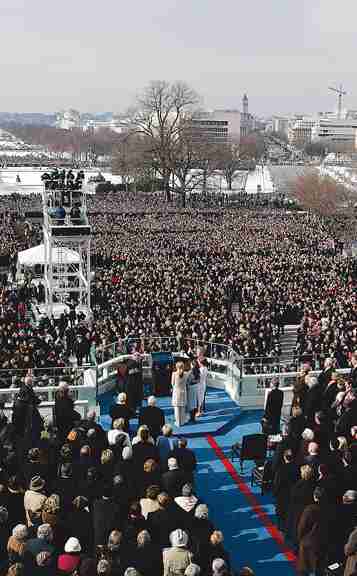 Mayer said the majority of students that went are members of the College Republicans.

“It was a natural step after the election,” Mayer said. “We had a lot of our members in the College Republicans working hard on campaigns.

“I thought that would be a good chance for a lot of members in the College Republicans to see something like this; it’s very rare. It’s something special.”

James Binney, a political science professor and adviser to the NKU College Republicans, accompanied the group to the inauguration.

Binney said the trip was a good learning experience for the students.

“It’s a first-hand witness of democracy in action,” Binney said, “the peaceful transition of power. Something that a lot of other countries have a great deal of difficulty doing.”

Binney said there were some protesters at the event, which was also something the students could learn from.

Binney said he and the students talked about how “politics is about consensus and majority rule with minority rights, and not to really take it personally that those people are protesting and to deal with them in a calm fashion.”

“I thought it was good for a lot of the members in the College Republicans to visibly see the other side of the issues,” Mayer said. “I think that was one of the nicest things because you’re not sheltered around just your party’s side; you’re forced in that situation to really hear out other people, and I think that’s one of the greatest things about democracy.

“While you’re there in support of your President that you helped get elected, you also had the demonstrators who didn’t agree with your side.”

Binney said the inauguration was also a good experience for him as a professor.

“We’re supposed to do public service as part of our tenure responsibilities,” he said. “This kind of event… is really rewarding. You really get close with kids and kind of bring together schooling and classroom knowledge with real-world events.”