Tattoos make their mark on students 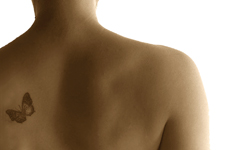 From a rebellious statement in the 1960s, to a common addition to the body today, tattoos have become an art of their own.

Tattoos were first adopted by rock stars in the 1970s, and later in the 1980s, tattoos were accepted by a broader, mainstream audience. Today, they can be seen not only on rock stars, but also on athletes, movie stars, singers, models and many other public figures.

Students at Northern Kentucky University have also assumed this art form, adorning their bodies with pictures out of books, images with symbolic meaning and even tattoos in memory of lost love ones.

“I spent about an hour trying to figure out what I wanted,” freshman Jerad Burris said of his tribal back piece that spans between his shoulder blades.

His back piece is one of four tattoos he has acquired since his 18th birthday. He also has a small tribal arm band, his initials on his forearm and a Chinese character meaning “to drink” on his neck – which spawns a lot of conversation, he said.

Tattoos are not only something to add design to Burris’ body; the initials on his forearm have become a family tradition.

“My brother has his, I have mine and my sister is going to get her (initials done),” Burris said.

Of all of his tattoos, the one on his back is his favorite.

“The one on my back hurt really bad,” Burris said.

Though the process sounds painful, certain places on the body don’t hurt at all, while other places produce a high level of pain.

Some of the most painful places on the body to tattoo are the genitals, sternum, ribs, hands, wrists, feet, ankles, lower back, neck and head.

Despite the pain, some students decided to get tattoos in these regions.

Laura Gauck, a freshman criminal justice major, had a lower back piece done on her 17th birthday.

“It wouldn’t look good anywhere else,” she said of her tribal design with a heart and a rose.

Many students compared the pain of a tattoo to getting a shot, a repeated bee sting or needles dragging across the skin.

Since people have different pain tolerances, different places on the body may hurt more than others. People who have undergone major surgery or women who have given birth may think tattooing isn’t painful at all.

Karen Lunn, a senior marketing major, insisted the tattoo on her lower back didn’t hurt. “It was just annoying. I could carry on a conversation the entire time.”

According to Rebecca Campbell, a senior anthropology and business administration major, “part of the reason you get it done is for the pain.”

Campbell plans on getting “sleeves,” a term for covering a person’s entire arm with tattoos, much like an actual shirt sleeve would. So far, she has one on her ankle and back and three on her right forearm.

“I don’t like sporadic tattoos everywhere,” Campbell said, “I like them all to be kind of cohesively pooled together.”

Along with considering the pain of getting inked, many other things should be considered before getting a tattoo.

The location of the tattoo is important. For women, any area on the stomach or hip is susceptible to stretching from pregnancy.

Also consider the future when it comes to choosing a tattoo. Will it hinder any job opportunities? Will I like this design in 10 years?

“I want them to be meaningful,” Ketteler said.

Currently, he has praying hands with a banner on his bicep. Written on the banner are his brother’s initials and his grandfather’s initials – both died within months of each other.

Whether they have a strong personal meaning or are picked out of a book, tattoos represent something about the person they decorate.

Although a mainstream art, tattooing should still be taken seriously. The design is a permanent part of a person’s body.

Care Once the tattoo is complete, it is up to the individual how good the art will look. The care during the healing time is the most important. A person’s physical condition, age, diet, medication and amount of alcohol consumption are all deciding factors of how fast they will heal after getting a tattoo. With proper care, a tattoo generally starts to look good after two weeks.

* After leaving the tattoo shop, leave the art covered for two to 12 hours, touching the tattoo as little as possible. * Remove the bandage by wetting the gauze in the shower. Do not re-bandage. * Wash the tattoo with a mild anti-bacterial soap and water and pat dry. * With clean hands, apply a light coat of antibiotic ointment at least three times a day to keep tattoo from drying out. * After five days stop using ointment and use non-greasy, fragrance-free lotion to keep the tattoo moisturized. Within seven to ten days it should stop feeling tender.