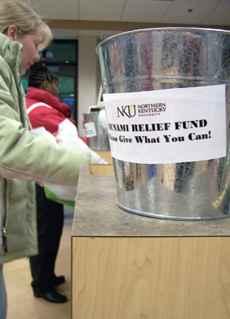 Northern Kentucky University, along with Xavier University and the University of Cincinnati, are involved in a team effort to collect money for the tsunami relief fund.

The primary donations from NKU are going to be from donation jars that will be set up all over campus, run by student organization volunteers to collect.

The goal is for everyone, students and staff to donate one dollar, making the monetary goal somewhere around $15,000.

Senior speech communications major Holly Caudill has been working with Dean of Students Kent Kelso and Director of Student Life, Betty Mulkey to kick off the campus donations.

“We did really well with volunteers during the basketball games last Tuesday and Thursday,” Caudill said. “We raised about $180 at the second one, and $120 at the first.

“There was one student playing guitar with an open case to get donations that way, and the game announcer announced that we were there in case people didn’t see us when they came in. It was a lot of fun.”

Mulkey also feels that things are going well, especially when it comes to the student involvement.

“The student organizations have willingly stepped up; it seems like people really want to be on board for this,” she said.

Kelso announced there will be a competition among student organizations to see who can collect the most for the relief effort.

The winner will receive a $250 grant and a pizza party. Those interested should contact the Office of Student Life.

The Chair of the Department of Theatre and Dance, Ken Jones also decided to coordinate a relief effort for the entire department.

The theatre department will be putting on a “variety show” which they are playfully calling ‘Bridge over Troubled Waters’.

Afterwards there will be desserts, and the ticket money will be donated to the Red Cross,” Jones said.

Donations from NKU will be shared equally between all of the government-approved agencies that are assisting in the relief efforts.

The donations will continue until Jan. 3, and then on Feb. 10, at the UC-XU game there will be closing ceremonies.

The presidents of all three universities will be at the ceremony to represent their respective schools, along with international students from each country affected by the tsunami carrying that country’s flag.

The tsunami, which hit southeast Asia Dec. 26, was the result of a massive earthquake, which struck in the middle of the Indian Ocean and was responsible for the deaths of about 145,000 people.

The earthquake measured a 9.0 on the Richter scale.