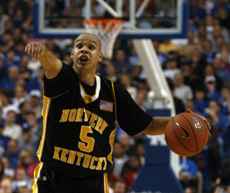 In this week’s Hot Seat, John interviews Jordan Stowers. Jordan is a senior guard on the Norse basketball team. John Rasp: If you were to play your brother Brenden (a former NKU star) one-on-one, who would win? Jordan Stowers: I definitely would. He’s been away for a while and it would be a good game. But, playing each other growing up a lot, I have his moves down so I would definitely win.

JR: When are you going to dunk? JS: Probably, never. Maybe if they decide to lower the rims a little bit.

JR: Right now, the men have the same record as the women. Which team will have more wins this year? JS: We definitely will. I hope the best for the women’s team but we’re struggling right now. We started on fire, then hit a slump. Hopefully, this is our slump that most teams go through and we can hopefully run off eight or nine in a row.

JR: Fact or Fiction: The NKU commercial that has you making a three pointer is the only one you ever made. JS: Unfortunately it’s not. I made one or two more than that. They probably only had two or three to pick from.

JR: Which NBA player would you say you most play like? JS: I don’t know about NBA player, but for a college player Ed Cota from North Carolina was always one of my favorite players. He was more of a point guard that passed the ball and got other people the shots.

JR: Fact or Fiction: You will have more assists this year than shots taken. JS: That is definitely a fact. I probably have maybe 20 shots this year and I’ll probably shoot the ball 40 times this year.

JR: Why don’t you shoot the ball much? JS: I don’t know. Coach has been getting on me about not shooting but I just try to get other people the ball. I have Kelsey and Purdon who are good shooters and I try to get people the ball inside.