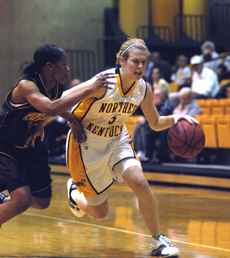 Five players scored in double figures for NKU, which improved to 7-7 overall, 5-3 in the Great Lakes Valley Conference. Karyn Creager led the Norse with 17 points, and she also added seven rebounds.

Creager netted 11 points in the first half as NKU forged a 32-29 lead at the break. Sarah Woods scored nine of her career high 16 points before halftime for the Norse.

Brittany Winner keyed the NKU spurt with six points, and the Norse controlled the remainder of the game. NKU has won seven of its last nine games after starting the season 0-5.

Karmen Graham hit a trio of three-point shots and finished with 12 points for NKU, while teammate Connie Myers had 11 points and 10 rebounds. Winner scored 10 points for the Norse, who won at the PAC Arena for the first time since the 2002 NCAA Division II Great Lakes Regional.

NKU used 34-for-43 shooting at the free-throw line to seal the victory. The Norse also held Southern Indiana to 35.6 percent shooting from the field.

NKU will play host to Bellarmine at 5:30 p.m. Thursday in Regents Hall. Earlier this season, Bellarmine rallied to defeat NKU, 77-66, at Louisville.

Bellarmine will enter Thursday’s game with a 12-2 overall record. The Knights are 6-1 in the GLVC and tied with Quincy for first place in the league standings.

ST. LOUIS – Karmen Graham scored 13 of her 20 points in the second half as Northern Kentucky University posted a 67-57 win over Missouri-St. Louis Jan. 6 in the Mark Twain Building.

Connie Myers added 13 points and five rebounds as NKU improved to 6-7 overall, 4-3 in the Great Lakes Valley Conference. The Norse shot 52.6 percent from the field in the second half and limited Missouri-St. Louis (2-9, 0-7 GLVC) to just 31.6 percent shooting for the game.

“We needed a big win to stay in the race for the GLVC,” said NKU head coach Nancy Winstel.

The Riverwomen cut the NKU lead to six points, 60-54, with 1:04 remaining in the contest. Graham scored six points in the final minute to put the game away for NKU.

“I thought Graham did some really good things and stepped up for us tonight,” Winstel said.

Creager finished with 12 points for NKU, which used 29-for-38 shooting from the free-throw line to seal the victory.

Brittany Winner added eight points and seven rebounds for NKU, which leads the all-time series with Missouri-St. Louis by a 13-2 margin. The Norse are now 8-1 in the Mark Twain Building.

The Lady Norse are 5-3 in GLVC Conference action and are currently in 4th place in Great Lakes Valley Conference standings.