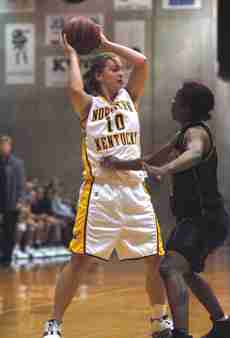 John Rasp: What’s the biggest difference between Elon and NKU? Brittany Winner: The basketball program at NKU is much better than Elon. Also, I like being closer to home.

JR: Do you think that NKU could beat Elon if they played them? BW: This year, NKU would win.

JR: Out of assistant coaches Matt Schmidt, Michelle Cottrell and Michelle Wolf, which one(s) do you think you could beat one-on-one? BW: I hope I could beat Michelle Wolf, but she’s cool. I could take the other two off the dribble, but I couldn’t post up on them.

JR: What pre-game music do you listen to? I like a lot of different types of music. BW: Before games, I like to listen to music that pumps me up. Right now, I like Green Day’s new CD.

JR: Do you have any superstitions? BW: I used to, but I don’t have any anymore. I used to have a lucky sports bra, but not anymore.

JR: How many times do you think you’ll foul out this year? BW: None. I usually don’t foul a lot.

JR: This year’s team has four seniors and four sophomores. Who would win if the two classes played a four-on-four game? BW: I’d say the sophomores could take them. I think we would have a better all-around attack.

JR: What would you say was your best game this year? BW: Probably the Northwood game. I had no turnovers and I was proud of myself for that.

JR: Which men’s player do you think you would have the best chance of beating one-on-one? BW: I would say Adrian (Wilkinson) because he’s tall and I’m quicker. Also, he’s nice and would probably let me win.

JR: What would you say is your funniest moment on the court? BW: It was at the end of practice. Coach set up a trick out of bounds play called “Buckets” where Karmen (Graham) had to fall on the ground and bark like a dog and it worked.

JR: Who was the toughest player you’ve ever had to guard? BW: Alana Beard last year at Elon against Duke. It was quite the experience.