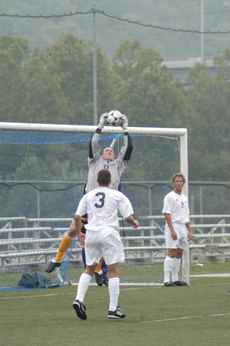 The Northern Kentucky University men’s soccer team took a step closer to advancing to the GLVC Tournament Oct. 1 with a 1-0 victory over Southern Indiana University Friday.

With the win, the team snapped a short two game losing streak.

The GLVC only takes the top six teams for their conference tournament. With the victory, NKU stands in sixth place with 2-2-1 record and 7-2-2 overall.

Head Coach John Basalyga was happy with his team’s effort. “We did what we had to do to win. Every win in the conference is a big win for us in trying to get into the tournament.”

Senior goalie Nate Madden picked up his eighth shutout of the season, collecting four saves in the contest.

“It was an ugly win for us. We had some key players out of the line-up and our guys pulled together and played hard,” said Madden.

The team played without freshman defenseman Andy Bacon who sat out the game with a concussion suffered in the Southern Illinois University match at Edwardsville last week.

“We were beat up tonight but that is no excuse. Our kids pulled together and played hard tonight,” said Basalyga.

The match was scoreless in the second half when freshman midfielder Chris Thompson chased down a ball at midfield, beat the Eagles defense, and scored the winning goal. It was his third goal of the season.

“We had a counter attack going and the middle was wide open. It came down to one on one with goalie and I was able to score,” said Thompson.

It was, once again, the NKU defense that stole the show. The Eagles had a 11-4 shot advantage on the Norse, but strong performances by the back line led by junior David Lies and Madden held them in check.

“When you have four kids in the backline who are disciplined and playing well like our guys are, you can be successful,” said Basalyga.

With the loss, Southern Indian dropped to 2-8-1 overall and 1-3 in GLVC play.

“Our defense was solid tonight. We are still working on our offense and I look for good things in the future from our offense,” said Thompson.

The team now goes on the road for the most important road trip of the season. They play three key conference games with Bellarmine, Kentucky Wesleyan and Indianapolis. They wrap up the trip with a non-conference game with Truman State.

“We are doing a great job of winning at home,” said Basalyga. “We have to establish a mindset that we can win on the road. We just have to stay focused and concentrate on what we are doing and we will fine.”

“Every conference game is important from top to bottom. We have to be ready to play each game,” said Madden.

Chris Thompson scored two goals Sunday to lead the team to a 3-1 victory against the University of Missouri-St. Louis.

Kyle Roberts also added a goal for NKU, which improved to 8-2-2 overall, 3-2-1 in the Great Lakes Valley Conference.

Thompson opened the scoring for NKU at the 30:56 mark when he took a lead pass from Randy Walters and beat Missouri-St. Louis goalie Adam Balbi. NKU increased the lead to 2-0 at the 43:23 mark after Thompson stole the ball and finished with a shot from 18 yards that found the back of the net.

Thompson, a redshirt freshman, now has a team-leading five goals this season.

Roberts iced the victory at the 71:13 mark with a 14-yard shot that landed in the upper right corner of the net. Jonathan Market, however, ended NKU’s streak of shutouts at home when he fired in a shot at the 82:08 mark.

Market’s goal was the first allowed at home by the NKU defense in nine games this fall.