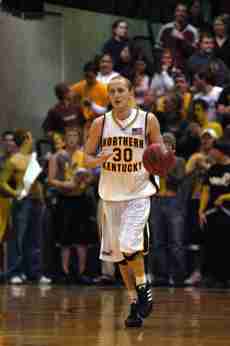 In this week’s Hot Seat, John interviews Brian Lewin. Brian is a sophomore forward on the men’s basketball team.

John Rasp: Which of the men’s basketball assistants can you beat one-on-one? Brian Lewin: I can beat Coach Elrod. I like to think I can beat Coach Marshall and Coach Listerman, but I’ve never played them.

JR: How many dunks will you have this year? BL: Zero. I can’t jump.

JR: Which player would you call the “ladies man”? BL: Everyone says that Steve Purdon is, but he is married. Mike Kelsey is also in love. I think Jordan Stowers is…the ladies like him a lot.

JR: You’ve played almost all of the positions on the court. Which one is your favorite? BL: I like playing the four position the most because in our system, because the four position steps out and I’m big enough to guard the other teams four. But sometimes they don’t step out far enough to guard me. JR: I heard that you like to dump water on yourself before the game. Is this a superstition? BL: I don’t know if it is a superstition or not, but I’ve been doing it since high school. I take a cup of water and pour it on the top of my forehead and let it drip down. The first time I did it, Schappell thought I was trying to drink it.

JR: If you could play another sport here, what would it be? BL: Golf. I played it in high school and I’m awesome.

JR: Would you say that you are the best golfer on the basketball team? BL: From what I’ve gathered, I would be. I heard that Mike Kelsey is pretty good, but I don’t think he has a chance at beating me.