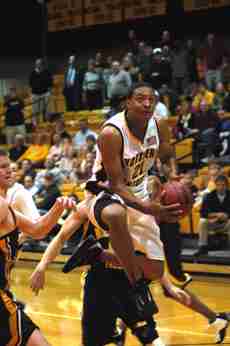 His team has started the season with impressive wins over ranked teams such as Michigan Tech and Kentucky Wesleyan.

After losing to Bellarmine Nov. 28, the team stands at 4-1 on the season and 1-1 in the Great Lakes Valley Conference.

Coach Bezold feels there is still plenty of work to be done for his club.

“We still need to work harder on defense getting to the right spot,” Bezold said. “We still get into situations on offense where we don’t move well.”

The Norse began the season with three very important exhibitions games with University of Kentucky, University of Cincinnati and Ohio State University.

Bezold feels the experience of playing against the Division I teams was positive for his team both on the court and off.

“For our guys who work so hard, it really gives our kids a positive experience playing sports and tremendous exposure for them,” Bezold said.

Michigan Tech was ranked sixth in the NCAA Division II Poll going into the opening game with the Norse.

NKU won the game 55-53 on an off-balance scoop shot by freshman guard Harrison Morton. He led all scorers in the opening game with 12 points.

Morton came to NKU from Lexington Catholic High School in Lexington, Ky. He has provided excellent play at the guard spot all season long. Coming off the bench he leads the Norse in scoring, averaging 12.4 points per game and posting the highest field goal percentage on the team.

The Norse won the Championship game of the Classic by defeating Northern Michigan University.

Senior center Pat Carey had a career night, scoring 17 points. He was also a perfect six for six from the field and five for five from the free throw line.

“It’s really important for us to win early in the season. It gives us confidence during the season that we can beat anyone we play,” Cary said.

Cary is off to a great start to this season as well, averaging 12.2 points, and a team leading 5.6 rebounds per game. He’s second on the team with a .556 shooting percentage, and the man is one of the team’s leading free throw shooters, sinking nearly 92 percent of his free throws.

Senior guard Steve Purdon feels this team has the talent to beat anybody on any given day.

“We just need to continue to work hard on defense, getting to the right spot every time,” Purdon said. “We have the talent on both sides of the ball to beat anybody.”

The key to the season for the Norse will be how well they fare on the road in GLVC play.

“We have to win on the road this season,” Cary said. “We have to find a way to get our intensity high enough to win the close games on the road.”

Last season the Norse finished 7-3 at home against GLVC opponents, but struggled on the on the road, posting a 2-8 record against the conference.

The Norse took a giant step in the right direction Nov. 26 winning on the road against 13th ranked Kentucky Wesleyan 79-67. The win was the first by the Norse over the Panthers since Dec. 5, 2002.

The backcourt combo of Jordan Stowers and Sean Rowland did an excellent job distributing the ball combining for 16 assists, while committing only three turnovers the entire game.

The team shot 53.8 percent from the field and limited Kentucky Wesleyan to just 37 percent.

“We are very happy with our start,” Bezold said. “We are starting to grow as a team. This year we have to prove to ourselves that we can win basketball games.”

“We are really playing right now as a unit,” Purdon said. “We just have to continue to develop on defense and we will be fine.”

NKU was defeated for the first time in the regular season Nov. 28 at Bellarmine, losing 64-60 in a back and forth game that featured 20 lead changes and 11 ties.

Derek Smith scored a career-high 20 points in the game to lead the Norse. The former football player from the University of Kentucky has played well in his first season playing basketball for the Norse.

Smith has started every regular season game for the Norse, and is averaging 11.2 points and five rebounds per game.

“With the amount of time Derek has been away from the game, he has done a great job of working his way back to where he can help us on the floor,” Bezold said.

NKU is making 50 percent of their shots from the field this season, while limiting opponents to a .395 shooting percentage. The team is also averaging nearly 10 more points per game this season than the opposition.

Outside shooting has been a major factor in the early success this season.

The Norse have made three more three-pointers than their opponents, while attempting 22 less. Purdon leads the team with 12 three-pointers, and is also the leading shooter making over 50 percent of his shots from deep.

The Norse will continue in GLVC play with road games at Indianapolis Dec. 2 and Saint Joseph’s Dec. 4 .

Indianapolis is winless in the conference this season and has a 1-2 overall record. The Greyhounds feature a high-scoring combo of David Logan and Lawrence Barnes, who each average at least 20 points per game.

Saint Joseph’s has a 1-1 conference record, and is 2-2 overall on the season. The Pumas are second in the GLVC in scoring an feature Sullivan Sykes, the leading scorer in the conference at 25.5 points per game, and another top 10 scorer Devin Thomas, who averages 16.5 per game.

The Norse don’t return home again until Dec. 9 when they play host to Lewis.