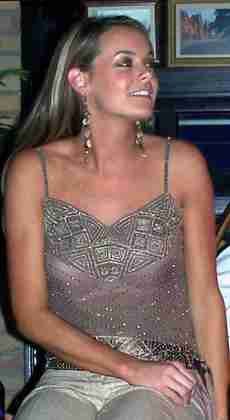 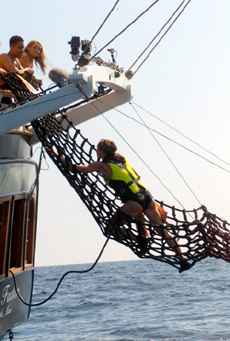 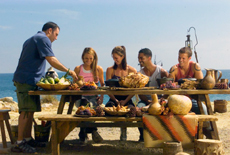 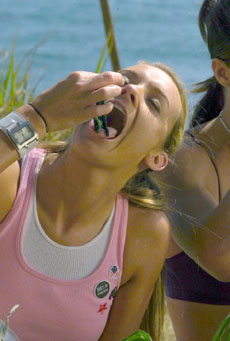 Elizabeth Costello had the most disgusting Thanksgiving meal of her life this year.

Costello wasn’t very hungry though. She only ate the green beans.

Fear wasn’t a factor for her seeing as how she came in second place out of six contestants.

Even though she considered herself the underdog, Costello said she knew she had a chance to win the $50,000 grand prize.

Costello dedicated her performance on the show to her father, who at the time was battling cancer. Doctors told her father he had six months to live, and when Costello received the phone call from “Fear Factor” producers telling her that she had been chosen, it was well into that sixth month.

Initially, Costello wasn’t sure if she should go on the show or stay home with her ailing father. She told her father, whose favorite show is “Fear Factor,” that she had been chosen and he encouraged her to go on the show.

Costello said the producers were very compassionate towards her father’s situation and said they would send a tape to her as soon as it was cut so her father could see it. Unfortunately, they called back the day after he died.

Costello was recommended to “Fear Factor” producers by her cousin and friend who work in Las Vegas. They gave the producers her phone number, and Costello received a call from them to do a phone interview. Costello was later chosen and flown out to Los Angeles for the seven-day taping.

Costello said she wasn’t nervous about going on the show, but she did prepare – by eating a cicada.

For the first stunt, contestants were on a large ship that was pulling a dinghy. They had to climb out of the dinghy and onto a net on which there were six flags. The contestants had to grab the six flags and climb up the net onto the ship as quickly as possible.

Costello said she was glad to go second. She finished with a time of 48.3 seconds, which was better than three other contestants’ times.

Costello said when she saw the ship she was excited because she knew she would do well in water stunts.

“My nickname was ‘Fish’ growing up because I was a water baby,” she said. “I never got out of the water. I knew I would be good with the stunts.”

The second stunt was the infamous eating segment of “Fear Factor.” However, for the Thanksgiving special contestants were not eliminated after this stunt.

Instead, each contestant had to choose three out of five disgusting dishes. For each one they ate, the contestants had a chance to throw a hatchet at a target. Whoever was closest to the target won $10,000 and picked the order in which each contestant would participate in the next stunt.

Costello only ate one of her dishes, the worm green beans, because she didn’t think she could even attempt to eat the other two: the beetle, worm and cockroach stuffing and the sheep’s brain pie with worms.

Costello said she swallowed the worms whole and was surprised about their sharp texture as they went down her throat.

“I would have tried (to eat more) if we got eliminated,” she said, “but I was just thinking I can’t even throw a hatchet, I’ve never thrown a hatchet and I really am competitive, but I don’t think that I would beat a guy at throwing a hatchet.”

Costello threw her hatchet first, and it missed the target.

The third stunt was the one Costello dreaded the most.

Contestants had ball and chains shackled to their ankles and were told to walk a plank into the water.

While under water, they had to unscrew the shackle, swim to the surface and touch the boat. The contestant who completed the stunt with the fastest time won.

Landon Cooper, the contestant who went second, was thought to be one of the strongest competitors. He struggled with the shackle and forfeited the stunt.

Because three contestants could advance into the final round, all Costello had to do was complete the stunt.

She may have had the slowest time, but she successfully completed the stunt.

For the fourth and final stunt, contestants had to dive 15 feet into the water under the hull of the boat, which measured 22 feet across. While under the water, they had a maximum of two minutes to clip seven flags to their belt. Whoever attained the most flags, or whoever grabbed all seven in the fastest time, would win $50,000.

Costello was chosen by the winner of the previous stunt to go first because she showed her strength on the water stunts, Costello said.

After diving into the water, Costello was making good time. However, after obtaining a few flags, her bikini top fell off.

Costello lost her concentration while struggling to put her top back on, and had to come up for air. She went back down and grabbed the remaining flags, but her wardrobe malfunction took up precious time.

Had her top not fallen off, Costello said she could have completed the stunt in one breath.

Costello said her microphone was wrapped around her bikini top, and after being hooked up to the microphone three times, her top came loose.

Costello watched nervously as the next two contestants performed the stunt.

The next contestant, Jayson Woolley, struggled under the water and only collected five flags.

Costello was extremely excited when he failed, considering there was only one more person keeping her from winning $50,000.

Costello was hoping the final contestant, April Steiner, would make a mistake. Unfortunately for her, Steiner completed the stunt with a quicker time.

“I was upset about the whole thing,” Costello said. “I totally think it would have been a very close call if I wouldn’t have lost my top.”

Although she was disappointed, Costello said appearing on “Fear Factor” was the greatest experience in her life.

“It was a once-in-a-lifetime chance,” she said. “Imagine somebody spending millions of dollars on an amusement park for just you to ride.”

Costello said thinking about her father was what kept her going during the stunts. “I just thought about him sitting at home fighting for his life,” she said. “I just take life a different way now, because I’ve seen him suffer.”