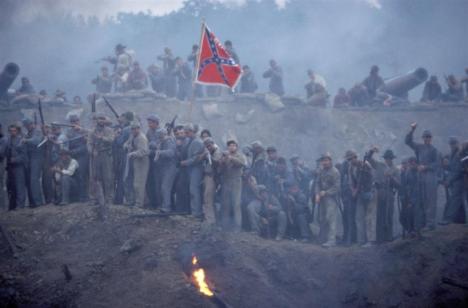 Anthony Minghella’s “Cold Mountain” is a timely exploration of war’s effects upon the lives of ordinary people. In a time where the media saturates us with images of faraway war that most of us cannot relate to, Minghella reminds us that war also tears apart lives, families and communities.

His message, though sobering, is also uplifting, as we see how the effects of the Civil War make the characters stronger, for better or worse.

Based upon Charles Frazier’s 1997 novel “Cold Mountain,” the film tells the tale of how the war changes members of a small North Carolina town.

Inman (Jude Law) is a shy country boy who leaves town and joins the war for reasons that aren’t clear even to him. He, like the other young men in the town, gets swept up in a “We’ll show the Yankees who’s boss” attitude, but quickly realizes that war is not a boys’ game when he sees his friends killed and wounded in the gruesome battle of Petersburg in Virginia.

We see his journey as he deserts the Confederate Army to rejoin his love, Ada (Nicole Kidman). Inman battles external forces to return home, and, emotionally scarred by the brutality of war, fights internal forces to regain some part of the man he once was.

Ada and Inman’s relationship is based upon a few brief meetings before he leaves for the war and a series of emotional letters between the two, where Ada communicates her love for him.

It is one of these letters, in which Ada implores Inman to come back to her, which causes him to desert the Army and begin the perilous journey back to her.

Ada remains behind in the town of Cold Mountain, left alone after Inman’s departure and the death of her father. She struggles against losing her home, starving to death, and fending off the Confederate Home Guard who, in addition to hunting down and shooting deserters, seek to steal Ada’s farm.

Her journey is internal, as she evolves from an innocent city girl to destitute and alone with little hope of survival. We then see her progression from complete despair to a gradual acceptance of the changes in her life and her evolution into a strong woman.

She is aided by Ruby (Renee Zellweger), a self-sufficient mountain woman who helps Ada rebuild her farm and learn to survive without the support of a man.

Ruby takes a journey as well, as Ada teaches her the meaning of love and friendship and helps her shed her tough, protective shell.

The movie focuses upon the brief sweetness of a first love that sustains both Inman and Ada throughout the war, as well as how the war changes both characters. Inman becomes lost in the horrors he has seen in a war that he doesn’t know why he is fighting, and Ada discovers an inner strength she didn’t know she possessed.

Zellweger offers the film’s most light and humorous moments in her surprisingly comedic and touching portrayal of Ruby.

It is refreshing to see Zellweger in a role where she can display her impressive versatility as both a dramatic and comedic actress.

She truly shines as a character that swears, makes inappropriate innuendoes and rips the heads off chickens.

The supporting cast provides a sturdy foundation for the main characters to build upon, and is, aside from Zellweger, the film’s only salvation from its own self-importance.

Among them, Natalie Portman and The White Stripes’ Jack White stand out. White gives a solid performance as a deserter and musician who wins Ruby’s heart. Portman is heartbreaking as a lonely widow whom Inman befriends, and who he saves from rape and death at the hands of the Confederate Army.

The bad side to the film is that, at two hours and 35 minutes long, it seems to drag on longer than necessary.

It is also melodramatic at times, overemphasizing the grandeur of the Romanian scenery as well as Ada’s pain of being separated from Inman.

Despite solid performances, it is also difficult for Kidman and Law to make believable a love that is based upon a handful of meetings and a series of letters.

It is easy, however, for viewers to get lost in this poignant story of how quickly and profoundly war can change lives.

The film is a much-needed reminder that war is more than a brief series of images on television in our daily lives.