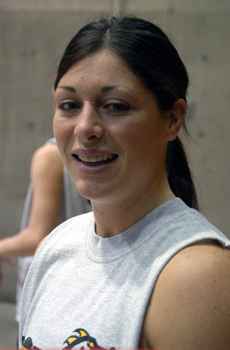 The 2004-05 Northern Kentucky University women’s basketball team enters the season ranked fourth in the Great Lakes Valley Conference preseason poll. The race for the conference title should be a close one, with four teams receiving first-place votes in the poll.

Burrows is returning to start at guard. She led the team with 120 assists and 40 steals last season.

Myers returns at forward after leading the team in scoring last season. She is also the returning leading rebounder and finished second on the team in steals.

Perkins returns at the guard. Perkins averaged 9.6 points last season and finished second on the team in assists. She is also one of the team’s best outside shooters.

Coach Nancy Winstel returns for her 22nd season as head coach for the Norse. She owns a 456-151 career record and has guided NKU to six consecutive NCCA Tournaments.

The Norse finished 17-11 overall (12-8 GLVC) last season and finished sixth in the conference.