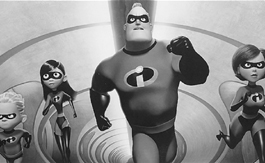 The creators of “Toy Story,” “Monsters Inc.” and “Finding Nemo” have added another film to their collection of computer-animated classics.

In their hey-day, the Incredibles: Mr. Incredible (Craig T. Nelson) and Elastigirl (Holly Hunter) were the best at fighting crime.

The story begins as Mr. Incredible saves a man who is committing suicide and accidentally injures the man’s neck in the process.

The injured man later sues the Incredibles for injuries and saving him when he did not want to be saved.

The superheroes are forced to move and create new, normal lives. The story then picks up where the Parrs have created their own family with three children, all of which have inherited unique super powers.

Parr, who now works for an insurance company, longs for the adventure he used to have. One day, he gets a mysterious message asking him to dust off his old superhero suit. Not allowed to use his super powers any more, Parr secretly accepts the job.

Although superheroes, the characters are occasionally brought down to human levels, making them more believable and imperfect. For example, Mr. Incredible owns a car, but due to his bulging muscles he barely fits inside and nearly crumples it with his strength.

The children use their super powers in their sibling rivalries: hyper speed, force fields and invisibility.

The movie is mainly intended for children and their parents. Like most of Disney and Pixar’s movies, children like it because it’s not too complex. At the same time, it appeals to adults because it has deeper jokes that fly by the kids, but parents can get a laugh out of.

The world of 3-D animation improves with every movie Disney and Pixar make. This was evident in the hair of the characters and the modern look of the movie.

If you like Disney and Pixar’s previous work, you’re destined to appreciate “The Incredibles.”