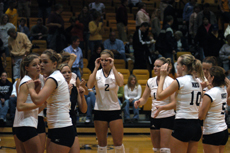 RENSSELAER, Ind. – The late-season run continued for Northern Kentucky University on Saturday, and the Norse are suddenly one of the hottest volleyball teams in the Great Lakes Region.

Kristin Koralewski finished with 22 kills, 24 digs and a .392 hitting percentage for NKU, which improved to 19-8 overall, 12-3 in the Great Lakes Valley Conference. Lynne Fischesser added 11 kills and 17 digs as the Norse coasted to the important road victory.

Amber Timmons tallied 17 digs and also added two kills for NKU, which owns a 26-5 lead in the all-time series with Saint Joseph’s.

Koralewski now has 499 kills this season and 1,425 during her career at NKU. The senior All-American ranks sixth on the NKU all-time list in that category, and she needs 102 kills to break the Norse’s single-season record of 600 (set by Bethany Gastright in 2000).

NKU will play a road match at Bellarmine University at 7 p.m. next Friday, and close out the regular season at 2 p.m. Saturday with a non-conference home match against the University of Charleston.