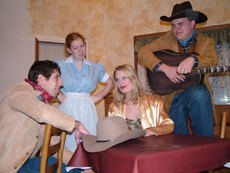 “I understand everything I say, and secretly despise the way I say it,” said Dr. Lyman, played by Stephen Hunter, to other members of the cast in the latest performance by NKU’s theatre department “Bus Stop.”

Although he may despise it, the audience loved the way he, and the rest of the cast, said it opening night Oct. 28.

Hunter, along with seven other students, performed the William Inge original from 1955. The play is set in early March inside Grace’s Diner, a street-corner restaurant in a small town west of Kansas City.

Grace, played by Amy Schwegmann, is the owner of this small diner. Schwegmann, who is not afraid to show the sexual directness of the character, captures the cantankerous attitude of this middle-aged woman. Grace, along with her young niece Elma, played by freshman Ann Royse, runs the restaurant – which is only in business because of its location near the bus stop.

The entire play is viewed from inside the ’50s-style diner.

Working late one night, Grace and Elma are visited by local sheriff Will, played by Jeffery Miller. The sheriff came to inform the women of a highway closure caused by a blizzard. The volume that Miller possessed in this production was amazing. The authority of his voice made the small town sheriff character have the respect he deserved.

Without much warning, the two restaurant workers had to prepare for the long stay of four unexpected guests. While readying the tables, nightclub singer Cherie, played by Elizabeth Alexander, runs in screaming. She said a rowdy cowboy kidnapped her. Casting Alexander for this role was a smart choice. Her blonde hair, long legs and thin appearance make her perfect for the vixen role.

After the sheriff calms her, our second passenger enters the restaurant. Dr. Lyman makes his entrance in a poetic fashion and is intrigued immediately by the young Elma.

Bus driver Carl, played by Derek Shipman, is the infatuation of Grace. Shipman plays the middle-aged awkward man with style. He seemed to transform this dull bus driver into having the attitude of a suave player. From the moment he walked into the diner, she attends to his every need. The chemistry between the two characters was very apparent.

It is at this point where the “rowdy cowboy” Bo, played by Greg Hillner, and his sidekick mentor Virgil, played by Christopher Wyllie are introduced.

The door flies open with a shouting young man. With a belt buckle as big as his waist, his temper exceeds his size. The moment the audience sees Bo he is fighting with the sheriff, and the audience can see the adolescence in this character.

After things have cooled down with the cowboy, Grace, whose husband is long gone, decides to go “lay down upstairs” in her apartment to help a “headache.”

Meanwhile, Carl decides he needs some fresh air and takes a “walk”- in the blizzard.

With the diner left to young Elma, she is able to bond with many of the passengers. Cherie, who has decided to completely ignore her cowboy kidnapper, confides her life story in the young waitress.

As the hours pass by, Elma decides that a show by all of the people stranded would help the time pass quickly. The passengers played guitar, sang and acted.

Though an innocent idea by the young girl, the performances only anger Cherie from Bo’s outbursts and send the drunken Dr. Lyman into an emotional roller coaster before passing out on a bench.

The plot of the play revolved around the coming of age for the characters. From Bo finding that he can’t force true love, to Dr. Lyman realizing his life needs direction to Elma realizing that everyone isn’t as genuine as she is.

Each of the characters walked away from their hours together in the diner with a new perspective on life, love or both.