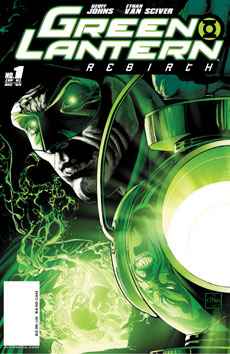 Ten long years have gone by since Hal Jordan was the universe’s greatest Green Lantern. In those ten years Jordan has been a villain, saved the world and become the spirit of vengeance known as the Spectre.

Many consider Hal Jordan the one, true Green Lantern, and they are going to have a hard time sleeping until the conclusion of the Green Lantern: Rebirth miniseries.

In issue one, current GL John Stewart and former GL Guy Gardner meet up with Jordan at a baseball game. When Jordan shows up, everyone in attendance, including Gardner, begin acting strange, confessing their sins to Jordan.

Later, as Gardner and Stewart are reminiscing about the good old days when Jordan was a GL, Gardner’s superpowers, which can turn his body into a living weapon, act up and cause an explosion, which nearly kills him.

Meanwhile, Jordan deals a vicious hand of vengeance on his former villain the Black Hand, who was caught breaking into Jordan’s long-time pal Green Arrow’s home. This leaves the Green Arrow worrying about his friend, and starting to believe that something’s not right.

As the Justice League attempts to revitalize Gardner, Stewart and Batman argue about whether Jordan’s villainy is a result of tragedies he endured, or if it was always a part of whom he was.

While the Justice League argue about Jordan’s mindset, the Flash and Aquaman find something puzzling. Coast City, Jordan’s home city, which was destroyed (causing him to become a villain), is being rebuilt.

What was once a crater is now a blueprint of roads, street signs, stoplights and one building – Jordan’s old apartment complex.

The future of one of comic’s greatest heroes will unravel in this much-anticipated six issue miniseries.