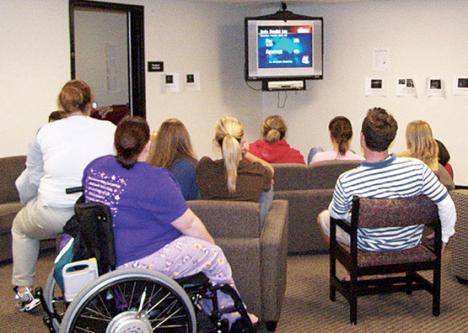 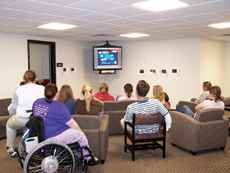 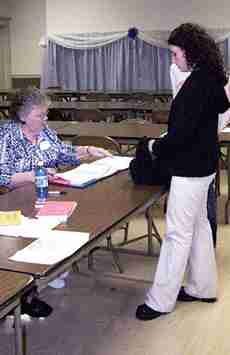 WASHINGTON – President Bush and Sen. John Kerry grappled over Ohio early Nov. 3, neck-and-neck in a close contest that could decide the presidency.

Bush was declared the winner in Ohio by two television networks shortly after midnight, which appeared to put him in a strong position to win the election. But Kerry’s campaign manager – mindful of how Al Gore fought to contest a result once he was declared the loser four years ago – urged the country to hold back from deciding too quickly.

“The vote count in Ohio has not been completed,” said Kerry campaign manager Mary Beth Cahill. “There are more than 250,000 remaining votes to be counted. We believe when they are, John Kerry will win Ohio.”

Democratic vice presidential candidate Sen. John Edwards appeared before supporters in Boston hours later to tell them the election would not be decided soon.

“It’s been a long night,” Edwards said at 2:28 a.m. “We’ve waited four years for this victory. We can wait one more night.” He also vowed to “fight for every vote.”

It was unclear whether it would take one more night or more to count those Ohio votes. Ohio Secretary of State Ken Blackwell said that if the victory margin came down to provisional ballots held aside because of challenges to suspect voters, state law requires that they not be counted for 11 days. Whether the count would be settled sooner was unclear, but it was evident that Ohio could determine the outcome.

With only one exception, Bush was holding all of the states he won four years ago, including Florida. If he held the rest, including Ohio, he would have at least 274 electoral votes, four more than needed to claim a second term.

If he lost Ohio’s 20 electoral votes, he would have to win away some combination of states that went Democratic last time. Several remained too close to call early Wednesday, including Iowa, New Mexico and Wisconsin.

Bush took a 3 million-vote lead in the popular vote; with 89 percent of the nation’s votes counted, Bush had 51 percent and Kerry 48 percent. Third-party candidates, including Ralph Nader, were all in single digits.

Republicans also held control of the Senate and the House of Representatives and appeared poised to possibly increase their margins in each.

As it was in 2000, the country was divided, and the two rivals carved up much of the country along the familiar red-blue lines of election night maps, with red for Republican states and blue for Democratic states.

Interest was so high that polls remained opened past closing time in several states. The results came after Americans surged to the polls in the first wartime election in more than three decades.

Unusually long lines at precincts across the country underscored the intense interest in the outcome, with the stakes high and the choice between the two main candidates clear.

Bush watched the returns from the White House, summoning reporters to the residence to tell them he felt he would win. As late as 2:30 a.m., he was huddling in the family quarters with Vice President Dick Cheney, among others.

Kerry watched from his home in the Beacon Hill section of Boston, getting updates by phone from Cahill and strategist Michael Whouley from the “boiler room” in Washington.

“We just don’t know at this point,” senior adviser Mike McCurry said, when asked whether Kerry planned to come down to address the crowd of 10,000 waiting in the rain in Copley square. He and adviser Joe Lockhart said they were trailing by 200,000 votes in Ohio but remained hopeful.

“In Ohio we’re waiting for the heaviest and most concentrated Democratic vote to report in, Cuyahoga County, the Cleveland area,” Lockhart said. “Gore won convincingly in 2000 and we project our vote ahead of Gore’s there this year.”

Kerry, 60, the Democratic nominee, vowed change at home and abroad. He promised to re-engage America’s traditional allies in Europe, expand health care for the uninsured, reduce health costs for businesses and employees, cut taxes for the middle class and raise taxes for the wealthy. He vowed 10 million new jobs.

Many Americans braved hour-plus waits to vote, suggesting that turnout could be the largest since 1968, when the country wrestled with its choice of a leader at the height of the Vietnam War. The last time the United States conducted a presidential election in wartime was 1972.

“I’m willing to wait no matter how long,” said Kelly Jimenez, 34, of Miami’s Little Haiti neighborhood. “Not everybody in the world has this privilege.”

“This election is too close to leave it up to chance,” said Langon Kane, 26, of suburban Philadelphia, who voted early so she could baby-sit her friends’ children in the evening, when their parents planned to vote. “I will be watching the returns tonight and holding my breath.”

Added Janice Carey, 52, of Davie, Fla.: “I think this is the most important election of my lifetime.”

American GIs standing watch in Iraq and around the world voted by absentee ballot.

“This election is in the hands of the people, and I feel very comfortable about that,” Bush said after voting at a firehouse near his ranch at Crawford, Texas. “Now’s the time for the people to express their will.”

He flew to Columbus, Ohio, for one last campaign pitch. He thanked volunteers at a phone bank, then took a line himself to talk to one surprised supporter. “Julie, this is President Bush calling,” he said. “No, I promise you it’s me. … I’m proud to have your support. I appreciate you taking my phone call. Thank you so very much.”

He told reporters that he and Kerry had given the American people a hard-fought campaign and a clear choice.

“Both of us will be able to say that we campaigned as hard as we possibly could,” Bush said. “I have made the differences as clear as possible about why I think I am the best leader for the country for the next four years.”

Returning to Washington aboard Air Force One with first lady Laura Bush and their two daughters, Bush looked back on the long and sometimes bitter campaign by watching a slide show put together by a White House photographer. He watched the returns from the White House.

Kerry started the day in LaCrosse, Wis., before returning to Boston to vote with his two daughters and enjoy a traditional Election Day dinner at the Union Oyster House, a Boston landmark.

“I’m very confident we made the case for change, for new leadership,” Kerry said.

His wife, Teresa Heinz Kerry, voted with her children from her first marriage near their Pittsburgh-area home before joining the senator in Boston.

Memories of the 2000 election result and month-long recount battle hung over the day. But most problems appeared minor.