Pumpkins carved in a new light 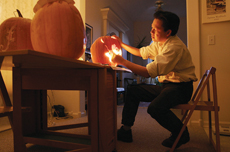 LEXINGTON, Ky. – Pumpkins for pies. Pumpkins for plain old jack-o’-lanterns. We’re all familiar with those. But Dr. Vu Nguyen takes one of those big orange orbs dotting the fields and turns it into an art form.

“Origami is my first love. I do more origami than anything else, but this is fun,” said Nguyen, 39, a psychiatrist.

Nguyen (pronounced Win), a native of Vietnam whose family came to Louisville, Ky., in 1975, said he never carved pumpkins as a child. It was not part of Vietnamese culture. In Kentucky, he said, “maybe once my dad carved a pumpkin for us, with triangles for the eyes and nose.”

Five years ago, Nguyen became interested in carving “just for the heck of it,” he said.

“I used a knife – it didn’t work very well – to carve different faces like a cat’s face and lots of designs.”

His carvings became more elaborate, and Nguyen searched the Internet for new ideas; he found directions for doing photographic portraits.

Each pumpkin portrait takes about three hours from start to finish.

“Like with anything, the more you do it, the faster you get, and you begin to develop your techniques,” he said.

The keys to success are choosing a large pumpkin and sturdy tools. Nguyen doesn’t use pumpkin carving kits because the tools aren’t big enough, strong enough or sharp enough. He buys tools designed for wood carving and making pottery. Instead of using a knife, he bought a scroll-saw blade from the hardware store and a small handle for it.

“Once you start cutting away the mid-tones, achieving different shades of gray, is when I have to use a lot of artistry,” he said.

The Michelangelo of the pumpkin patch will start the week before Halloween, carving one or two every night, he said. Some will be portraits, and others will be what Nguyen calls extreme pumpkins: boldly carved, with a pyrotechnic aspect as flames shoot out the top.

All will be used as decorations for the Halloween party he and his sister, Trang, are giving Halloween weekend.

To demonstrate how to do a pumpkin portrait, Vu Nguyen carved a likeness of his sister, Trang, a graphic designer in the Lexington Herald-Leader advertising creative services department.

* The pumpkin: Start with a large pumpkin. If the pumpkin is too small, you’ll go crazy trying to carve the intricate details.

The guts: Cut a generous-size lid that extends part-way down the back of the pumpkin. Remove seeds and insides. Wash the pumpkin inside and out with dishwasher soap and water. Dry. Using a scraper, scrape away part of the inside to thin out the rind so light will shine through.

* The photo: Select a photograph with a clean background and sharp black-and-white contrasts.

“If you don’t have a good picture to start with, your pumpkin won’t turn out good,” Nguyen said.

* He used Photoshop software to remove the color from the picture and to boost the contrast between black and white tones. Leave gray tones because that is what will distinguish the portrait from the usual jack-o’-lantern carvings.

* The transfer: With a small tracer projector bought at a crafts store, Nguyen projected the photo onto the side of the pumpkin. He then traced the features, including the nose and mouth, with face-paint crayon. He also outlined areas on the nose, cheeks and forehead that were white tones.

* The cuts: With an X-acto knife, cut around the crayon tracings. Next, cut out the white highlights on the nose, cheeks and forehead. Keep the photograph close by to refer to.

* The shave: Before shaving away rind from the gray areas to create different tones, Nguyen put a white Christmas light inside the pumpkin to shine through the rind. The light helps when you shave away layers of pumpkin pulp, creating a three-dimensional affect.

* Wash and rinse: When finished, put the pumpkin in the sink, and wash away the remaining crayon lines with soap and a sponge.

* The secret to aging: Rub Vaseline to seal the surface and hold in moisture. WD-40 also works.