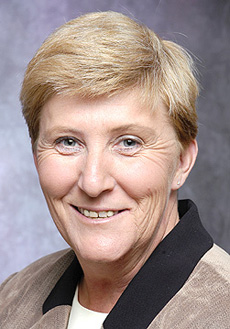 In this week’s hot seat, John interviews Women’s Basketball Head Coach Nancy Winstel. This is the 27th year Winstel has been involved with the NKU women’s program.

John Rasp: What would you say is the maddest you’ve been either during a game or at practice?

Nancy Winstel: The Saturday before we went to play in the Elite Eight the year we won the National Championship was probably the maddest I’ve been. I threw the team out of practice. I told them to get out of the gym because they were wasting electricity and that they didn’t deserve to be in there. Afterward I felt bad, but in hindsight, we had a really good practice after that. Last year, I was mad all of the time because I had eight new players.

JR: What is your response to men’s head coach Dave Bezold saying that you would get seven more technical fouls than him this season in last weeks hot seat?

NW: Now that he is the head coach, I feel that we will see a personality change from him. I guarantee that he will have more technical fouls than me. I am always under control in my 20 plus years as coach. We’ll see how he acts now that he’s in the head coaching hot seat. He also has Listerman over there, and he’ll probably have more than anybody.

JR: How many players can you out shoot from the free throw line?

NW: One year when we were down in Florida, I thought their fans were a little too abusive to our kids. After the game, it was a little tough to shake the hand of the coach even though we beat them.

JR: Since you are playing the National Championship team from 2000 on November 13th in an exhibition, do you have any expectations for that game?

NW: We want to beat them. I jokingly said that I would be coaching the team that is winning at the end. We are definitely going to try to run because our conditioning should be much better than theirs. Also, my assistant coach Michelle Cottrell may have specific duties on our bench during that game.

JR: Have you ever been tossed from a game?

NW: I’ve never been tossed. Where did these seven technical fouls that Dave Bezold say I would get come from? I have the utmost respect for the referees, and I’m in total control on the bench.

JR: How does being on ESPN two times in the last five years help recruiting?

NW: Tremendously. If you can tell your recruits you’ve been on live ESPN in a National Championship game its pretty special. There is a lot of Division I players that never get to play on ESPN. Right now, the kids we are recruiting are the ones getting Division I offers. That’s the carrot you try to throw out there to convince the player to go Division II.