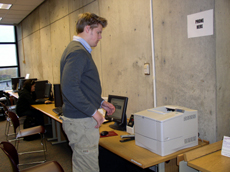 The Board of Regents and the Dean’s Council have made a decision that will cost Northern Kentucky University students approximately $160,000 in the next year. “Pay for Print” will be implemented on Oct. 20 and will require students to pay eight cents per black and white page printed.

According to the Pay for Print Web site, this decision was made because of “the excessive amount of wasteful printing in labs.” The site goes on to say that “in the last year, millions of pages have been printed in IT labs alone.” When Pay for Print goes into effect, that eight cents per page required to print, multiplied by 2 million copies equals $160,000. So where is that money going?

Students have mixed opinions on the Pay for Print. Dyane Foltz, who has a Masters in Public Administration, wishes that students would get more copies for free before the program begins. “I know what being a poor student is like,” she said. “When I was a student at Eastern they used this same program and gave us 500 free copies.”

Finance major Amy Soper said, “Don’t we spend enough in tuition? I wouldn’t mind maybe a penny per page, but eight cents adds up. A lot of students don’t have the money for printers and computers at home.”

Pratt maintains that there will be benefits to students in the long run, though. “One of the reasons behind this decision is that it will extend the life of the printers. The biggest concern that we get from students in labs that have no IT help are that the printers don’t work or are jammed.”

Pratt knows that many are questioning this charge when tuition has been raised nearly 17 percent in the last year, but said “raising tuition to cover this cost would not decrease the waste of paper. People would still see printing as a free service.”

So far, it looks like this will be a permanent plan. However, free copies will be offered every semester before paying for them. There will not be any kind of rollover, so unused free copies at the end of the semester will be lost.

Pratt believes that NKU will start to see some positive progress on the savings from printing this semester, but will not be able to accurately gauge the progress until a full semester has passed with the program in effect. “Campus-wide we will be saving somewhere around $40,000 dollars,” Pratt said. The university will be tracking exactly how much will be saved through the budget.

Once the free copies run out and students have to begin paying for printing, they will need to add money onto their NKU All Card account. Each student has an account set up already, whether it is used or not. There is no cost in getting a card at the All Card office located in the University Center room 115, and the money that you add should be put onto your declining balance. Right now the declining balance is used only in dining and the bookstore.

“If you don’t have cash and want to add money to your account, you can come to our office and write a check or use a credit card,” said Linda Wright, associate director of the All Card administration.

Things could have been worse, though. Pratt says that NKU’s Student Government Association played a large role in keeping the cost of printing per page down and making sure that students got free copies before paying for them. “(SGA) told the college administration what their concerns were, and they definitely had a lot to do with it.”

For more information on Pay for Print visit http://payforprint.nku.edu.