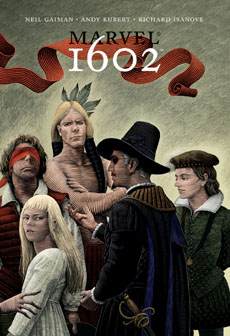 Marvel’s 1602 miniseries imagines what the Marvel Universe would look like in the year 1602.

In this story, strange weather looms over Earth, and some believe it’s a sign of the apocalypse.

The heroes band together to save the world, while also avoiding persecution by those who consider them witchbreed.

Something entertaining about this series was trying to figure out which characters were which, some of who weren’t revealed until the last issue.

The hardcover collects all eight-issues of 1602 and includes Neil Gaiman’s script to issue one and sketches by Andy Kubert.