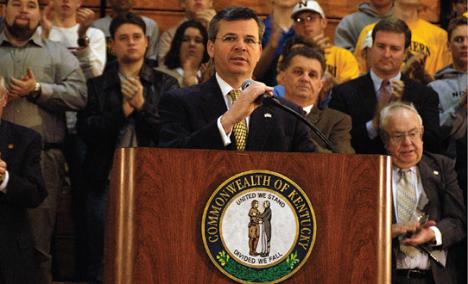 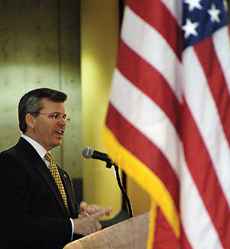 Gov. Ernie Fletcher flew in to Northern Kentucky University via helicopter Tuesday, April 6, to inform students, faculty, community leaders, and Kentucky officials how his proposed budget will affect the university and region.

“Gov. Fletcher was quick to recognize the importance of our region for Kentucky’s economic future,” Votruba said. “He was also quick to recognize that Northern Kentucky University and Gateway Community and Technical College can and must be primary engines for the region’s continued economic expansion. This belief was reflected in his budget recommendations – recommendations that included a first step towards correcting the university’s historic underfunding, recognition of our enormous facilities deficit, and a commitment to build a new regional special events center right here on our campus.”

Votruba introduced Fletcher by thanking him for acknowledging NKU’s impact on the growth of Northern Kentucky. He emphasized how much the university needs support from Fletcher’s budget, which was rejected by the Ky. House of Representatives March 29 and is currently being reviewed by a committee of senators and state representatives.

Fletcher discussed changes the Northern Kentucky economy has seen, as well as changes that his proposed budget would bring about to promote continued improvements for the university and region.

“We need a real change in Kentucky; not that we’re not a great commonwealth and not that we’re not all very proud of being Kentuckians and what our commonwealth represents, but the fact of the matter is when we look across this state there’s a great deal of opportunity and a great deal of potential that is left largely untapped,” Fletcher said. “Now you all have been very successful here, but when we look at the state as a whole we still are a relatively poor state.”

Fletcher attributed Kentucky’s deficiency partly to an inadequate tax system and previous debt. He said his budget includes some tough cuts, but those cuts could help correct some financial situations.

‘When I looked at that budget I initially presented, I knew it was a budget that didn’t come without some pain, because I inherited a $1 billion shortfall that I had to fix within the first 18 months,” Fletcher said. “We had a remedy system that doesn’t grow with the economy – neither does it reflect the economy. I had to make some cuts and I know Dr. Votruba and some other universities felt those cuts very deeply.

“But the fact of the matter is we had to make some reductions that were not painless. But that pain reminds us that the remedy that’s needed in the future makes sure that we don’t arrive at a place like this again where we have to make those difficult choices. But when I presented that budget I said something we can do is to make sure we provide the kind of opportunities for economic development and technical training that we need to insure that we have the groundwork and the foundation for attracting new jobs in this dollar-based economy.”

One way Fletcher hopes to attract more business to Northern Kentucky is by funding the new special events center that would increase capacity for athletic events, as well as bring in new activities such as concerts and graduation ceremonies.

Fletcher noted he was actually concerned that the initial amount proposed to build a center with 10,000 seats may be too low because the community is continuously expanding.

“This university is growing by leaps and bounds, and I don’t want you to outgrow this facility in just a few years,” Fletcher said.

Senior Sean Rowland, who has one season left with NKU’s basketball team, attended the presentation because he said he thinks Fletcher’s budget will benefit the university and local communities.

“I think it’s important to show that we support the governor, not only in what he wants accomplished, but also for the special events center. That’s something that needs to be done,” Rowland said. “It needs to be built because when you compare this gym to the other teams that we play, it is like a high school gym.”

“I saw a lot of community leaders out here today so we were just here to hear about the special events center and about his tax plan that he lined out very well,” Harrison said. “The special events center will certainly help the economy because we’ll get more events here and businesses will see that this university is committed to economic development and move their businesses here.”

As for the rest of Kentucky, Fletcher hopes that a new tax system will lessen financial burdens.

“We also need a tax system that matches our economy,” Fletcher said. “Our tax system doesn’t grow with our economy; neither does it stimulate the growth that we need.”

“As a Northern Kentuckian, I thought this was pretty important. He’s doing these [presentations] all around the state and this is the only one I’m going to,” Grayson said. He believes Fletcher showed a lot of interest in the welfare of NKU and the Northern Kentucky region.

Fletcher encouraged everyone in attendance to contact legislators to make sure their opinions were heard. He even provided a phone number for concerned citizens to call at 1-800-372-7181.

“Call them and encourage them to support the modernization of the tax system so that we can attract more jobs to Kentucky so that we can end up providing more money for the things that are needed like higher education, Northern Kentucky University and our K-12, because we’ll be able to do that,” Fletcher said. “And believe me, this plan actually reduces the taxes on 2/3 of Kentuckians.”

Fletcher said there is no reason for Kentucky to be a poor state, and that with the support of the people, Kentuckians could see the economy flourish.

“We have wonderful people with a great work ethic and an abundance of natural resources, and, with your help, we will move Kentucky forward,” he said.

Fletcher visited the Job Expo in the Albright Health Center to reinforce the importance of a strong relationship between education and the work force.

“I was just talking to Dr. Votruba about how post-secondary education is int
erwoven with economic development. I think this job fair kind of points in that direction – that it is about building careers and building opportunities,” Fletcher said. “That’s why I think it’s important when we look at the disparity we have in funding over the region’s universities that we begin an initiative to correct that.