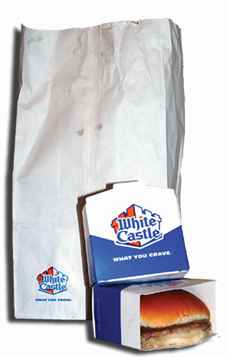 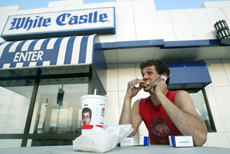 ST. LOUIS – Nancy Lowe strolled into the White Castle in Maplewood, Mo., around 8:30 and ordered four cheeseburgers, fries and a large orange soda. Nothing like a nice, hot meal to top off a long, hard day.

Which might be true, except that Lowe was downing her belly bombers at 8:30 in the morning. Bagel, schmagel. The time had come for some sunrise slyders.

“I’m usually here in the later hours,” explained Lowe, 57, a resident of Little Rock, Ark. “But I had to try to fit a visit into my schedule.”

The Washington University graduate was briefly in St. Louis to see friends, get a haircut – and make the regular pilgrimage to her beloved fast-food fortress.

Under normal circumstances, such a burger breakfast would come across as, well, odd. As would the ritualistic return visits.

But White Castle has rarely been associated with normal. Make that normal as in mainstream. Normal as in conventional. One of the restaurant’s famous promotional posters featured an oversized photo of a juicy hamburger with the jarring question: “White Castle for Breakfast? Why Not?”

At White Castle, you’ll find romantics dining by candlelight on Valentine’s Day. It is the burger joint, as you might have noticed, that has been getting play as the final destination in the recently released stoner comedy “Harold and Kumar Go to White Castle.”

Considered the original fast-food chain, the franchise never bothered to go national, and only in recent decades did it opt for a major advertising campaign. The salad-bar craze came and went without ever crossing the White Castle moat. The place has long played by its own rules.

And the burgers? Small, square and steamed in onions – with holes mysteriously punched out of the meat patty. Then there are the restaurants themselves, stylistic holdovers from the days of whimsical, roadside architecture. His excellency the Burger King – if there really is such a person – doesn’t flame-broil his wares in a medieval mansion. And that bobble-headed Jack guy? He doesn’t sell burgers from a giant jack-in-the-box.

But a White Castle is exactly that – a white castle, a signature structure that only adds to the overall cult appeal.

Toss in the old-school, stripped-down menu and a reputation as a late-night pit stop, and it’s easy to see why Harold and Kumar end up where they do rather than at a McDonald’s or a Hardees. Those other spots may be popular, and they may be tasty. But cult appeal? The Castle rules.

Not that cult appeal automatically equates to likeability. For some, White Castle is a unique place in that its very aroma can induce stomach-churning revulsion. One person’s castle is another’s case of Kaopectate.

The chain originated in Wichita, Kan., in 1921 and is headquartered in Columbus, Ohio. But St. Louis can stake claim as the first saturated market, with a White Castle restaurant opening there in 1925. There are now 392 stores.

Scarcity, as annoying as it is at times, has a way of driving up the cult factor.

Which is exactly what keeps those such as Lowe coming back – to the point of downing cheeseburgers in the hours we normally associate with corn flakes and Krispy Kremes.

She finishes off her last bite and takes a sip of her orange soda, ready to head back out of town to her job in Little Rock. She’s a preservationist there, a position that works well with the architecture degree she received from Washington University.

Lowe, one imagines, knows a good castle when she sees one.

A Burger by any Other Name

When you want a Big Mac, you ask for a Big Mac. Same with a Whopper, or a Jumbo Jack, or whatever other sandwich tickles your fast-food fancy.

Then there’s the White Castle burger, the little square with more aliases than a cheap motel guest ledger. Rare is the customer who approaches the Castle counter and orders a simple, straight-ahead “hamburger.” No fun in that.

Regulars instead rely upon a lexicon that ranges from pure affection to gastro-intestinal critique: they’ll order a Castle; a WC; a White Castle; a Whitey; a Slyder; a greaser; and the all-time classic – the belly bomber.

Not quite sure how the home office in Columbus feels about those last two nicknames, but White Castle System Inc. has trademarked Slyder.

If you’re a crazed Castle-head who wants that name for your next-born child, you might want to seek legal advice.

Other spots might offer it if you ask, but White Castle has long been king of the mix. Just don’t look for it on the menu.

For those who don’t know, a “mix” is what develops when cola and orange soda find their way to the same cup.

Some will cringe at the thought. But for a number of White Castle regulars nothing works better than a mix when washing down an order of cheese fries.

Again, don’t look for the concoction on the product board. Simply mention the code word “mix” and any Castle crew worth its salty fries will know where you’re coming from.

“Oh, sure, we know what a mix is,” answered several employees at the Maplewood location when quizzed. “We also know about ‘the suicide,’ which is a splash of just about everything we offer.”

And that beverage, as might be imagined, hasn’t made its way to the official menu either.