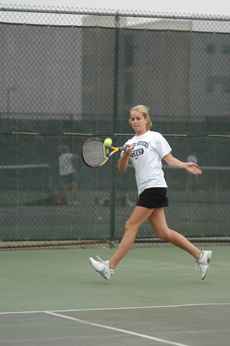 The Norse won two of the three contests in doubles competition.

NKU wrapped up the match by taking five wins in singles play.

Kari Goodrich and Jessica Smith teamed up for an 8-2 victory in No. 2 doubles, while Clara Dorado and Courtney Myers combined for an 8-6 win in No. 3 doubles.

The team posted a 9-0 win over Saint Joseph’s College Saturday.

Laura Leutzinger picked up a win at No. 1 singles with a 6-1, 6-1 decision over Missy Bachani. Leutzinger also teamed with Lindsay England in No. 1 doubles for an 8-1 victory over Bachani and Holly Berner.

NKU will play at the GLVC Tournament next Friday and Saturday at Indianapolis, Ind.

The Norse are the defending champions of that event, and NKU has captured the GLVC Tournament title five times during the past six years.