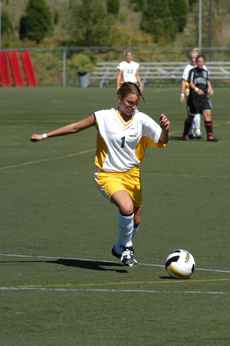 The Norse bounced back from a defeat on Sunday, outshooting Southern Indiana 6-2 in the first half and 20-5 overall.

At the 5:31 mark of the first half Sophomore Amy Law took a pass from Michelle Kelly and Jayme Light, then put the ball past Southern Indiana goalie Casey Hrvatin.

Around the 34 minute mark of the first half Kristen Lies put the game out of reach with another goal. The Norse continued to show why they have one of the best defensive units in the conference, by shutting down Southern Indiana.

“We know that if we can get a lead, we can shut down the other team,” said Senior defender Robyn Withers.

At the of the first half the Norse were up 2-0. When the second half started the Norse showed no mercy as they scored five more goals and outshot Southern Indiana 14-3.

“This was a great game to be a part of,” said sophomore Krista Rogers. “We showed the rest of the conference that we are not out of it.”

The Norse dominated play throughout the game, aided by Norse goalie Lauren Piening. Piening made five saves as she recorded her sixth shutout of the season.

“Last year we beat them 1-0, so this was a statement game for us,” said Shirley Ernst.

The team defeated the University of Missouri-St. Louis 2-0 on Sunday, with Kristen Votapek assisting on a goal and scoring another on a breakaway.

Piening recorded the shutout and had one save as NKU improved to 8-3 overall, 5-1 in the GLVC. The Norse also handed Missouri-St. Louis (8-4-1 overall, 3-1-1 in the GLVC) its first conference loss and defeated the Riverwomen for the 11th straight time.

Missouri-St. Louis has not beaten NKU since the 1997 season.

NKU struck early in the second half when Votapek dribbled past the Missouri-St. Louis defense on the right side and crossed to Light in front of the net. Light finished the play with her fourth goal of the season to give the Norse a 1-0 lead at the 49:14 mark.

Votapek sealed the win for NKU at the 68:42 mark when she took a pass from Kristen Lies and beat Missouri-St. Louis goalie Danielle Troha with a breakaway goal for a 2-0 advantage. Votapek’s shot came from 12 yards and gave the junior forward four goals this season.