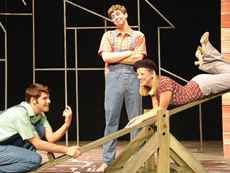 Opening season for the Department of Theatre and Dance began with a youthful performance of Babes in Arms.

With the coordination of director Mark Hardy, musical director Jamey Strawn and choreographer Alfred Dove the first production of the season was a hit for both students and community members.

Students played the teenagers of Seaport, N.Y. who faced the work farm after their parents joined the dying art of vaudeville.

In the beginning, the main character Val, played by Roderick Justice, was pouting about being left behind by his parents.

His good friend Marshall, played by John West, came over after bidding his parents farewell as they also left for the vaudeville.

The two devised a plan to live together to save money while their parents are gone. While Marshall was packing his belongings, the audience was introduced to the lead female character, Billy, played by Sarah Peak.

The rejected Hollywood actress hitchhiked across the country and landed in Val’s yard. The meeting of the two was a bit unbelievable. She walked into Val’s house and is instantly smitten by the timid young man.

After knowing each other for just five minutes, the two had already kissed. The two characters had wonderful chemistry but it could not save the script of this scene.

As Marshall came back to see Val, he brought the town sheriff with him, played by Dave Hennessey.

The youth were informed that because their parents had left, they stay at a work farm. Needless to say the idea didn’t settle well with the teenagers, also known as “the gang”.

Not long after news had spread, the gang entered. This is the best part of the production. Not only are the other characters introduced here, but it also sets the mood for the rest of the act.

The actors rode scooters, jumped rope and even entered on a giant swing while singing. The direction in this are was well thought out and captivated the audience.

The degree of in-depth direction is evident with the character interaction. This can be seen in the relationship between Val and Billy, and also with Dolores, played by Megan Osborne, and Gus, played by Brian Bailey.

These two characters have an on-again, off-again relationship.

It is obvious the duo is in love, but the wandering eyes of Dolores and the fighting spirit of Gus make it near impossible for a real relationship.

In the song “I Wish I Were in Love Again,” the two have a flirty song together reflecting on their feelings.

After the initial introduction of the gang, as a whole and some individually, they decide not to go to the work farm.

With the leadership of Val, the group formed a plan to perform a variety show to raise money.

Costumes in this area of the play were important. During the entrance of the gang, the audience could see the personality of each character, so as the dialogue continued the costumes represented each person rather than merely their actions.

The costumes were fitting because the play was written in the ’30s. The youthful colors and design gave each character flare and a sense of fun.

Many of the women in the production braided their hair into pigtails, whereas the men sported a slicked, combed-over hairstyle.

Much of the clothing fit the actors tightly, as seen toward the end of the flapper era, matching that of the decade.

Although Billy was supposed to seem wiser and different than the other characters, the choice of a retro shirt and bellbottom pants placed her more in the ’60s rather than the ’30s.

After a difficulty with funding, the gang was unable to raise the money to stay off of the work farm.

Act two opened with a scene at the work farm, in which the set looked its best. With the backdrop of a field and a large open area for the actors, the simplicity of the few props could be seen.

Milk cans held up the ends of a seesaw until the actors were prepared to use it. The actors interacted more with this set allowing for the audience to be engaged as well.

The combination of character interaction, fun costumes and a working made this performance very enjoyable.

The ending of the play left much to be desired. With the surprise appearance of a French pilot, played by Warren Bryson, the gang was able to perform their show by his donations. The parents of the gang came back to town and everyone lived happily ever after.

During the era of this play the nation was dealing with the Great Depression.

The audience of the time wanted to watch something entertaining and to take their mind off the struggles around them – thus the reason behind such a slapstick humor-filled play.