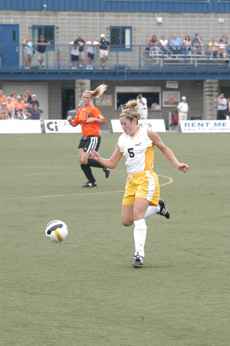 John Rasp: How did you end up at NKU?

Kristen Votapek: I wanted to come closer to home so my parents could watch me play. I also wanted more competition than NAIA where I played the two previous years.

JR: Do you have any superstitions?

KV: I have a lot actually. I listen to the same CD before every game with the same songs in the same order. I always pray before the game. Also, me and Amy Martini always cross arms and spit before games.

JR: What CD do you listen to?

KV: It’s Shedaisy (country). I started it my freshman year. I really didn’t pick that but it kind of grew on me. It’s not really pump up music.

JR: Last year, NKU had two games that came down to penalty kicks. If one came down to them this year, do you want to take one?

KV: Yeah, I guess when it gets rough it does happen. I try to keep my composure. I’d much rather score and show them that we are better than to talk trash.

JR: What is the hardest thing about being a transfer?

KV: Probably that I’m a junior instead of being a freshman. They see me a new player and not someone that they can look up to as much as if I were a returning junior.

JR: When you are close to receiving a card, what kind of things do you like to say to the referee to prevent them from giving you one?

KV: When I received mine, I went to the referee and showed him how the girl was pulling my arm on his arm. I guess I could have gotten a red card for touching the referee, but I did get the yellow. The main thing we try to do is to blame it on the other player. I wasn’t starting it, but retaliating when I got my card.

JR: What kind of personal goals that you’ve set for this year?

KV: I just want to score, and I haven’t really scored that much yet. I feel like my job is done on the field when I score.

JR: If you weren’t playing soccer, what sport would you play?