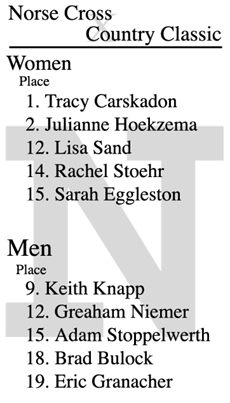 Tracy Carskadon won the women’s five-kilometer race in a time of 19:26.

In the men’s eight-kilometer race, Norse runner Keith Knapp finished ninth with a time of 26:55. He was the best finisher for the Norse.

Greaham Niemer finished 12th overall as he crossed the finish line in 27:13.

The Norse finished second overall, with a score of 66.

The Norse travel to Greensboro, N. C. on Sept. 25 for their next race.