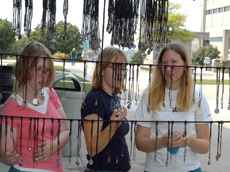 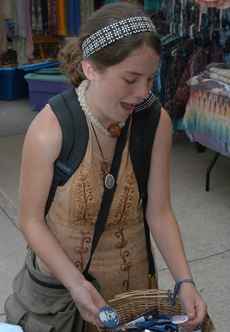 He’s been called many names including “the hippie guy,” “the tapestry man,” but one name stands first and foremost above all others, “Tye Dye Thom.”

“I was working down in the French Market in New Orleans,” Thom said, “and this Vietnamese woman, who is the main bead vendor, was describing me to somebody and she said, ‘You know, Tye-Dye Thom.’ From that day on [the name] stuck.”

Thom comes and goes throughout the school year, appearing a week at a time before he’s off on the road once more. While his stay is short-lived, his face tends to not be forgotten on campus. Students associate his long hair and unruly beard with the “hippie” stand that sprouts up periodically in front of the University Center.

Even though Northern Kentucky University students are familiar with Thom’s booth, typically filled with an array of bright colored clothing, purses, jewelry, tapestries, bumper stickers and pins, many find themselves wondering about the man himself.

“I’ve always been curious to know what sort of life he lives,” said Jennifer Roberts, a senior public relations major. “Where does he go when he’s not here? What’s his life like? That sort of thing.”

Thom has always known the call of the open road. “I grew up a lot of different places,” Thom said.

The son of Georgia and Richmond Curtiss, Thom was born 1966 in Pittsburgh. His dad was an English teacher, and Thom said they had to move a few times to accommodate his father’s job.

After living in Washington, D.C., with his family for some years, Thom began his own journey in life. He moved to Pensacola, Fla., where he studied history and theater at the University of West Florida.

After college, Thom said he planned to go to law school. But during his internship with a local lawyer, he said he found his path in life was down another road.

“I wanted to go to law school. I thought it would be perfect because theater teaches how to put on a show, and being a lawyer is part a show,” Thom said. “When I interned for this one particular lawyer and saw how much he lied, I realized that I couldn’t lie that much.”

Thom turned to other pursuits. He began to go to flea markets and sell jewelry that he had made, or T-shirts he didn’t want. “It seemed like a fun way to make money while I figured out what I wanted to do,” Thom said.

That “fun” has turned into Thom’s career for the past 16 years. He spent the first ten years of his entrepreneurship working in the French Market, an open-air market in New Orleans.

Thom said the French Market was a great place until tragedy struck on Thanksgiving of 1998.

“There was this place, the Pizza Kitchen, where I used to eat pretty much everyday,” Thom said. “Robbers came in and shot everyone in there. Three were killed and the fourth was wounded. They were all my friends.”

Thom decided that his luck had run out, and he didn’t want to live in New Orleans anymore. He took his store on the road. He met a man during Mardi Gras and the man talked about how he really wanted to take his stuff to colleges up North. Thom said the man mentioned this “college in Erlanger.”

That college happened to be NKU.

“I got in touch with Student Affairs and told them I was interested in being a vendor at NKU. I said, ‘I want to give a student group 20 percent of my profits,” Thom said.

“Then student activities paired me up with a group. This time the money will go to help some people attend a Pan-Hellenic council.”

Thom enjoys helping students at NKU, because he said students here seem to have their heads on straight.

“The reason why I like Northern Kentucky so much is that the students who go to school here have already started their lives,” Thom said. “If you go to Ohio State or anywhere else those kids are still trying to figure out what they want to do. Kids here are already in their future.”

Thom, who was a founding fraternity father of the ATO chapter at his university, said even if students know what they want to do, it’s important to get involved in organizations on campus.

“You gotta do something to apply the knowledge you are learning. You can’t just sit in a classroom.”

Thom said being in a fraternity gave him knowledge he still uses today.

“ATO was a fraternity that had the motto of solving conflicts and disputes for the betterment of all.” Thom said that philosophy fits in well with his hippie mentality. “A hippie is someone who places the good of others in front of oneself, someone who greets the day with a smile, someone who recycles.”

As for the myth about hippies and the habits typically associated with them, “I quit smoking cigarettes a long time ago, and I don’t promote or advocate synthetic or laboratory-made drugs.”