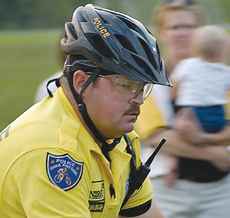 In the past weeks, the Wilder Police Department has been pulling over an unprecedented amount of Northern Kentucky University students for speeding on John’s Hill Road.

“We are not looking for NKU students in particular, it just turns out that in the last couple weeks every citation that I have written on John’s Hill road was for a NKU student,” Officer Andy Hayes said.

“Speeding is a real issue of safety,” Hayes said. “In the last two weeks, in the days I have been working, I have given out six to eight tickets an afternoon to NKU students between 2 p.m. and 5 p.m.”

The Wilder Police Department has been specifically targeting John’s Hill road because it is classified as a residential neighborhood.

“In a residential neighborhood, you never know when a child will pop out of a driveway riding a bike or a skateboard or what have you,” Hayes said. “They drop the speed limit a bit because when you are in a car and you are driving fast, you can’t react to what’s going on around you.

“It’s all based on trying to make everyone — the drivers and the pedestrians — have a safer environment, so everyone comes home at the end of the day.”

Hayes said that the student speeders who get caught usually follow the same blueprint.

“There is a pattern that has developed — it’s when class gets out. At 1:30 p.m. there won’t be as much traffic as later in the afternoon.

“I’m not really familiar with Northern’s schedule, but at 2:30 p.m., 3:30 p.m., and 4 p.m. the traffic gets a lot heavier.” , Since NKU’s classes have started, there has also been an increase in the number of accidents on John’s Hill Road. This has lead to the rise in patrols covering the street, making it “an area of special interest.”

“I worked an accident on John’s Hill Road three weeks ago when one of the kids from Northern was driving,” Hayes said. “I had a witness who was walking down the sidewalk and saw the car lift off the ground when it took a hill. If he was going that fast, obviously he wasn’t going to make the corner. It’s things like that we are trying to curtail because the people that were my witnesses had just walked the area of the sidewalk where this guy had just ran his car along and hit a ditch in the past 10 seconds. The car rolled up on its side, and had they still been in that area, they would have been squashed.”

Because of accidents like this, the Wilder Police Department has been cracking down on speeders because the area has become much more dangerous.

“This is just a small quiet residential neighborhood, you got kids crossing the street and people walking up and down the sidewalks, so with the speeds we are seeing it really becomes a safety issue,” Hayes said.

Hayes said that there is no “quota” that Wilder police officers have to fill every month, so an NKU student speeder is just as likely to be caught at the beginning of the month as at the end.

“My intent is not to hammer people with how much … I can make them pay. It’s to get a message across that they need to slow down,” he said.

However, NKU, and especially John’s Hill, is also a school zone that police agencies patrol often at the start of any year.

“It’s an important thing to just about every police agency out there, because it’s a hazardous situation — a lot of people milling around the schools (and) a lot people getting in and off buses. We want to remind people it’s school season again. The kids are out there — you got to be careful.”

At NKU, however, Hayes believes the police’s job is slightly different.

“The flipside at Northern is, ‘Hey there are other people out here, and other things more important than you just trying to get home or get to your job or whatever,'” he said. “You need to slow down a little bit and see what’s going on around you.”

Wilder police believe that people, especially NKU students, should know the speed limit and obey it because they are the ones who will be using the road the most often.

“If they come from Northern, I will ask them if this is their … first semester and they will usually say, ‘No this is my second or third year.’ (If) you have been driving this road for two or three years, you should know what the speed limit is and obey it.”