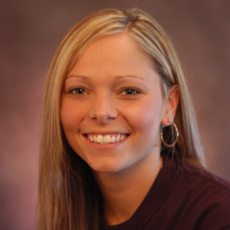 This week John sits down with Amber Timmons, a senior defensive specialist on the volleyball team.

John Rasp: What kind of team goals did you set this year? Amber Timmons: We want to win our conference championship and we also said that we’d like to go to the final four.

JR: Who would you say is the biggest trash talker on the team? AT: Maggie (Pugh) and Kristin (Koralewski). Maggie likes to say funny comments about the other team during volleyball matches.

JR: Which player is most likely to get yellow-carded in a game? AT: It could be anybody. I would probably say Kristin because as team captain she is the only one who can speak up to the referee.

JR: Fact of Fiction: You are a better server than head coach Carlos Chia. AT: As far as consistency goes, he is probably better. When it comes to serving an ace, I’m probably better.

JR: Which teams do you most want to beat this year? AT: In conference: Indianapolis and Southern Indiana. In terms of in our region, probably Grand Valley. And I’d like to play Northern Michigan again.

JR: What would students be most surprised about if they saw an NKU volleyball game? AT: I think our fast offense and how hard some of our girls can put the ball away would surprise some people.

JR: What kind of duties do freshmen volleyball players have? AT: Sometimes they have to carry the video camera for games. When we were freshmen we had to setup the net and stuff like that. We’re pretty nice to our freshmen.