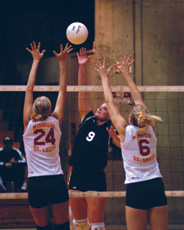 The Northern Kentucky University volleyball team was recently named a recipient of the American Volleyball Coaches Association’s (AVCA) team academic award. They were one of 31 NCAA Division II members that were awarded this honor.

Teams that receive the award range from high school boy’s and girl’s teams to NCAA Division I teams.

“This is a great achievement for our program,” said NKU head

volleyball coach Carlos Chia. “We try as coaches to help our athletes to get a good education and an award like this is a great achievement.”

“This award gives a great meaning to the word student athlete. It really shows that this team has some great students in addition to having some good athletes,” said Coach Chia.

“The main goal in college athletics is to recruit athletes not just in the sport of volleyball, but in all sports, to be good students in the classroom. We don’t recruit them to be professional athletes.”

The Norse Volleyball team starts the 2004 season this weekend in Pensacola, Fla. The tournament takes place at the University of West Florida.