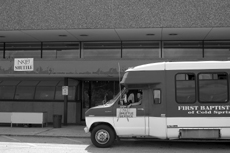 Northern Kentucky University’s newly-built parking garage will not be ready in time for the first week of classes this semester. The garage was supposed to open for student, faculty and staff use on Monday, Aug. 23, 2004. Vice President of Student Affairs Mark Shanley sent out an email to campus officials saying, “[W]e have experienced some last minute construction issues that prevent us from opening it as planned.” Vice President of Administration and Finance Ken Ramey said, “We had every intention of having a minimum of 100 spaces open, with the remainder to open mid to late fall. They ran into some issues that could not be resolved by the start of classes, some minor construction issues that needed to get taken care of. Our top priority is the safety of the students and their automobiles.” In the mean time, the overflow parking will be diverted to the old Thriftway parking lot next to the Herrmann center. A free shuttle will run from the parking lot to campus every 15 minutes. The shuttle hours are 7 a.m. to 5 p.m., Monday through Friday. Ramey said, “We only found out this past Thursday morning [about the garage’s being closed.] I have to commend Larry Blake and his staff at the physical plant. They did all the signage and logistics that had to take place for the shuttle, and they pulled it off in a day and half.” Students who use the shuttle service are offered free coffee, and a continental breakfast at the shuttle pick up point. Shanley wrote that this was “[A]n expression of our appreciation for your patience in this matter . . . ” Ramey said, “There was about 120 people using the shuttle on Monday and 140 on Tuesday. That’s pretty successful.” The shuttle service will continue until there is no more demand for it. “We will run it the first couple of weeks until the need for it trickles down to a few couple students, then we will discontinue the service,” Ramey said. The delay in the garage’s construction is not going to cost the students any more money. When the garage opens it will be free parking for the first couple weeks. Afterwards a fee of $1 will be charged for those paying with an NKU All Card or $2 cash. As to when the garage will be ready for use, Ramey said, “We have been told, it’s really up in the air, it could be as early as two weeks or it could be three or four. We will have a better understanding at the end of the week, what our time frame is.”