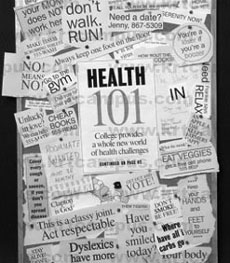 COLUMBIA, S.C. _ As a college freshman, you need to learn a pastiche of new things _ auto maintenance; sleeping through your roommate’s snoring; water imagery in 19th-century English poetry.

But the most important skill? Taking care of your health.

Most likely, you will get sick during your first semester. The factors working against you _ stress, late hours, cafeteria food, and the Petri dish of dorm living _ are a recipe for malaise. Your mom won’t be there with her cold washcloth and TV tray, so recovery (and prevention) are up to you.

“We get a lot of upper-respiratory problems and gastrointestinal illnesses,” said Cicely Jenkins, who’s been the director of nursing at the University of South Carolina for 18 years. “The season’s changing, and in the residence halls, one person gets something and it spreads.” She added that mononucleosis _ an infection that can keep its host out of commission for weeks _ is another fairly common reason for visits to the health center.

There isn’t much you can do about mono except try not to give it to anyone else (don’t kiss or share eating utensils) while you’re waiting for it to clear up.

For many freshmen, this fall will be their first time handling chronic health conditions alone. Benedict College head nurse Patricia Powell said that “quite a few” of Benedict’s 2,800 students have chronic medical problems such as high blood pressure, asthma and diabetes.

“Some of them have a hard time managing,” she said. “We do case management _ we have them come back and visit us, give them handouts to read and schedule doctor’s appointments.”

Eating disorders also are prevalent in university environments _ five percent to 20 percent of college women are affected, depending on which study you read. “Eating disorders are a very secretive thing,” said Janet Ziegler, a clinical psychologist at USC, “so usually a friend or roommate or sister comes in to talk to us. We do consultations on how best to get help for the person they’re concerned about.”

Ziegler added that counselors are bound by confidentiality laws and will not discuss a student’s personal health care with his or her parents.

College is a veritable cornucopia of young, single, attractive knowledge-seekers. You’ll look as good to them as they do to you, so it’s essential to start school with a healthy perspective on dating relationships.

“I think that’s just systemic, based upon what these young folks are coming to school with knowledge of,” she said. “They’re not familiar with how to deal with anger in relationships in appropriate ways and how to communicate needs in relationships in constructive, rather than destructive, ways.

Another rare but serious college health concern is meningococcal meningitis, a contagious infection and inflammation of membranes and fluid around the brain and spinal cord. It’s caused by bacteria or viruses (bacterial meningitis is especially serious). According to the Mayo Clinic Web site, the incidence of meningitis is increasing among those 15-24, and about 10 percent of cases are fatal. It usually starts with a high fever, vomiting, headache and sometimes a stiff neck.

Jenkins didn’t recall any student meningitis cases during her time at USC, but the Health Center encourages students to be vaccinated against it anyway.

“We have 5,000 letters going out about that,” she said. “It isn’t required, but we recommend it, as well as a Hepatitis B vaccine.

“If there’s a vaccine out there for anything and you can take it, you should.”